The revelation on Monday that the White House had copied parts of an ExxonMobil press release in its own official statement thrust President Donald Trump‘s team, once again, into the plagiarism spotlight.

“From a young age, my parents impressed on me the values that you work hard for what you want in life: that your word is your bond and you do what you say and keep your promise; that you treat people with respect,” Melania Trump said in her speech in July. It was one of the lines that most closely mirrored Obama’s words.

“Barack and I were raised with so many of the same values: that you work hard for what you want in life; that your word is your bond and you do what you say you’re going to do; that you treat people with dignity and respect,” Obama said in 2008.

In the days after the speech, the Trump campaign cycled through a series of defenses before Meredith McIver, a writer for the Trump Organization, admitted that it had been her “mistake.” Donald Trump continued to praise his wife’s speech, and he brushed off McIver’s error. “She made a mistake, and you know, people make mistakes,” he said at the time. “We all make mistakes.”

In the wake of Melania Trump’s convention controversy, critics initially raised questions about Donald Trump Jr.’s RNC speech, pointing out that some of his sentences were similar to those published in a May article in the American Conservative.

But the author of that article, law professor F. H. Buckley, turned out to have also been the writer behind Trump’s convention address. “I was a principal speechwriter for the speech,” Buckley said at the time, dismissing any accusations of plagiarism. “So it’s not an issue.”

Pundit Monica Crowley, who Trump had selected to be senior director of strategic communications for the National Security Council, backed out before the inauguration amid accusations of plagiarism.

In January, CNN identified more than 50 examples of plagiarism in Crowley’s 2012 book, What the (Bleep) Just Happened, accusing her of copying passages from news articles, columns and Wikipedia without proper attribution. Days later, Politico reported that Crowley had plagiarized more than a dozen passages in her Ph.D. dissertation.

Trump’s team initially defended Crowley, who later announced that she would not accept the national security post, withdrawing without addressing the plagiarism charges.

On Monday, an official White House statement about an ExxonMobil manufacturing investment included a full paragraph that was copied directly from Exxon’s press release.

Exxon, which was recently run by Trump’s Secretary of State Rex Tillerson, released its statement about 30 minutes before the White House. The following White House announcement praised the oil company for creating more jobs with its investment.

In a statement to CNN, a White House official said they had used information from Exxon.

“The expansion program has many different components to it, and we went straight to the source for some of our information,” the statement said. 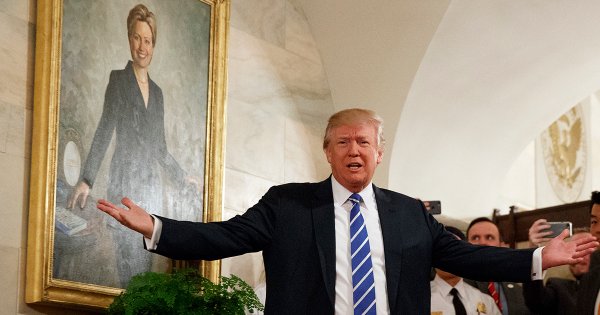