Trump’s Muslim Ban 2.0 Is Just as Inhumane — and Even More Frightening

For over 8 hours on Jan. 28, 2017, thousands flooded into Terminal 4 at New York's John F. Kennedy International Airport, at times shutting down the hub while protesting Donald Trump's executive order banning Muslims from certain countries from traveling to the U.S. Around 8 p.m. that evening, the federal court for the Eastern District of New York issued an emergency stay halting the ban.
Michael Nigro—Pacific Press/LightRocket/Getty Images
Ideas
By Naureen Shah

Shah is the director of Amnesty International USA’s Security with Human Rights Program.

The Trump Administration’s new Muslim ban is like a badly graded term paper. The first version was a mess. The revision is longer and better presented. But the thesis is still the same: Enshrine a cruel indifference to refugees and anti-Muslim prejudice into law and call it counterterrorism.

The Administration is at once doubling down on the ban and attempting to overhaul its aesthetics. We are supposed to believe that rather than President Donald Trump’s fear-mongering campaign promise of a “total and complete shutdown of Muslims entering the United States,” the ban has turned into a reasonable, limited and temporary security measure. That’s the narrative of Trump’s Cabinet officials, who went on a media offensive today while the President himself was benched. He signed the order behind closed doors.

But make no mistake, this ban is still a ban. It’s imperative that Congress see through the wordsmithing and call the second executive order out for what it is: Inhumane, irrational and deeply harmful to the country.

Although much is being made of the “scaled back” ban, that’s a misnomer. This second ban still decimates the country’s refugee admissions program, shutting it down for four months and leaving thousands of refugees stranded. Refugees who were poised to come to the U.S. after spending years going through intensive vetting — who sold their few belongings, said goodbye and set their sights on a better future — will be left with no option but to return to perilous situations, including in refugees camps and war zones.

During the so-called “pause” on the refugee program, refugees already in the vetting process will see their background checks expire. At best, they will have to redo a yearslong process. This is like leaving people in a burning building, telling them to “hold on a second” and hoping the fire will not consume them.

Another supposed selling point of the revised travel ban is that it drops Iraq from the list of banned countries. That’s a nod to concerns about alienating the Iraqi government and deserting Iraqis who served with U.S. forces. But many Iraqis who supported the U.S. — and who face death threats and violence because of it — will still be barred from coming here. Nearly a decade ago, Congress passed a law to give them direct access to the refugee admissions program. But the executive order thwarts that by suspending the refugee program altogether.

The new Muslim ban does exempt lawful permanent residents and current visa holders. But that won’t prevent significant damage to the country’s universities, which count on international students — who reap $32.8 billion for the U.S. economy. Nor will it undo the damage to the U.S. tourism industry, which will still be stigmatized by the order. No ones wants to plan a vacation to Disney World, after all, if they fear their country could be added to the ban list next.

There is an even more serious impact for American Muslims, who face a volatile climate of harassment, discrimination and even violence directed against them. By reasserting bigotry as a basis for “protecting us from terrorism,” the executive order may embolden more hate-based attacks. Instead of increasing security, this order will make all of us less safe — especially those of us who are perceived as “looking foreign.”

In some ways, the second ban is worse than its predecessor. It signals that the Trump Administration is determined to pursue its anti-Muslim, extremist agenda and will not be hindered by courts — nor by the showing of public concern which followed the first ban. That remarkable cultural moment — symbolized by the immediate airport protests and sustained by the solidarity of faith groups, civil rights figures and celebrities who’ve spoken out repeatedly over the last month — seems to have gone unheeded by the Trump Administration.

Nothing could be more frightening than this: An Administration that is so insulated from voices of moderation that it believes it can merely tinker with a policy that sparked outrage and somehow defuse it. This is a government unmoored from reality. It is more attached to a warped agenda of anti-Muslim fear-mongering than to the analysis of veteran national security leaders, many of whom told a court that the prior order “undermines the national security of the United States.”

This second Muslim ban is chilling not just for the thousands of people directly impacted, but for the country. If Trump’s second order survives, it will be because the original order set the bar so low that anything else — including this shallow revision — appears restrained. Graded on a curve, Trump’s policies will pass muster. But in this test of our collective commitment to humanity, fairness and equality, the rest of us will have failed. 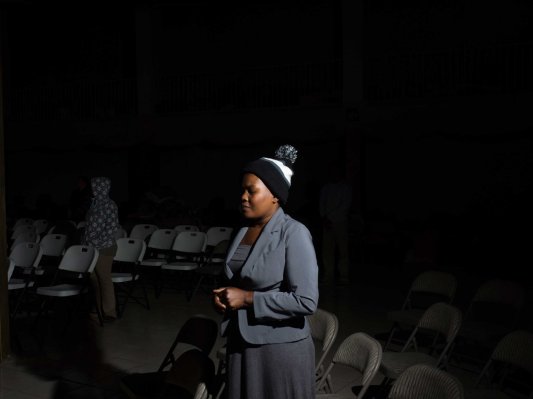 These Haitian Refugees Are Stranded at the U.S.-Mexico Border
Next Up: Editor's Pick