President Donald Trump’s new travel ban may still be generating controversy. But that’s a win for the White House because this time there is no chaos.

The presidential do-over, signed Monday morning, is designed to answer many of the legal and policy challenges raised by the initial ban, which was signed just days into Trump’s presidency, was drafted with almost no input and announced with little warning to Cabinet agencies, members of Congress, and the American public. The initial order has been put on hold for nearly a month by a federal appeals court, and will be superseded by the new one.

“I think you’re seeing by all accounts today, it was extremely well received,” White House Press Secretary Sean Spicer told reporters Monday afternoon. ‘The departments that are primarily responsible — State, Justice and Homeland Security — have done a phenomenal job of both briefing their staff, briefing members of Congress, briefing outside stakeholders, and briefing the media.”

The new order bans travel from six Muslim-majority countries, but bends to Pentagon pressure to remove Iraq from the initial list of seven banned countries. It also removes a specific prohibition on refugees from Syria, which contributed to critic’s arguments that the Jan. 27 amounted to a “Muslim Ban” as put forward by the president during the 2016 campaign. The new order also includes explicit carve-outs for U.S. legal permanent residents, existing visa holders, and those approved for refugee or asylum status in the U.S. The lack of clear guidance contributed to the scenes of disorder at the nation’s airports earlier this year, as federal bureaucrats struggled with implementing the order.

State and local governments, congressional lawmakers, and outside stakeholders all complained they were excluded from the review process of the initial order. At the time, White House officials and the president maintained that the secrecy was required to prevent bad actors from infiltrating during the implementation issue.

But White House aides acknowledged that the lack of communication was a critical oversight that led to days of negative press coverage and confusion. Meanwhile, the president took steps to empower Chief of Staff Reince Priebus’ oversight of the executive order process to ensure future orders were more thoroughly vetted through the inter-agency process. Spicer pointed to the new order’s rollout as an example of how that system is working.

“When I think you look at this rollout, of how this was done, it was done extremely effectively,” Spicer said. “There’s a 10-day window to ensure it goes into effect March 16 so that down-government, if you will, agencies and employees have the opportunity to make sure that they know what is expected of them and how to implement it effectively.”

“We stand by the first executive order,” Spicer said. “We felt that it was completely compliant with the law. But if you goal is to get something done in the quickest amount of time, then you take into consideration all of those things. We didn’t want to wait, potentially a year, to have it litigated through the court process.”

Spicer said Trump signed off on new the order and the decision to rescind the first one Saturday night after a briefing at Mar-a-Lago, his private club, with Attorney General Jeff Sessions, DHS Secretary John Kelly, chief strategist Steve Bannon, and other top aides. DHS had primary authority of coordinating the rollout along with the White House Domestic Policy Council, Spicer added.

Spicer said the administration benefited from having more of the Cabinet secretaries in place before the rollout. Sessions and Secretary of State Rex Tillerson had not yet been confirmed when the initial order was signed.

Speaking to reporters Monday, Kelly pointed to the administration’s efforts to brief stakeholders, Capitol Hill, and reporters. “There should be no surprises,” he said, “whether it’s in the media or on Capitol Hill.” 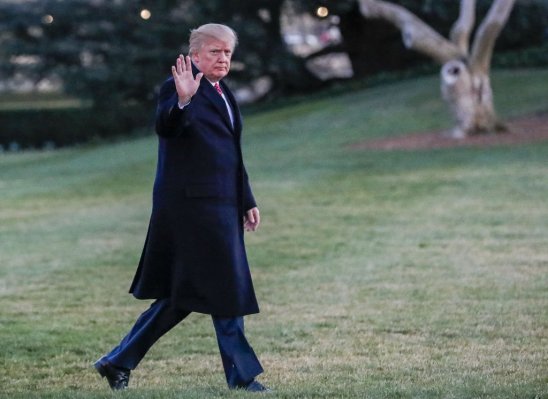