A far-right website loyal to Donald Trump says a so-called “Deep State” is the force behind a “covert resistance” to the new President. White House aides reportedly blame it for the daily stream of leaks that have kept Trump’s team on the defensive since before he even took office.

But what is the so-called “Deep State?”

To allies of Trump in the conservative media and on Capitol Hill, it is an organized resistance within the government, working to subvert his presidency. They blame career bureaucrats, many of whom they see as loyal to former President Barack Obama, for leaking damaging information to the news media.

But until recently, “Deep State” was a term mainly used outside the United States, and generally associated with authoritarian regimes like Turkey and Egypt. And government experts are skeptical one exists in America.

“This is a dark conspiratorial view that is being pushed by [top Trump strategist] Steve Bannon, his allies at Breitbart and some others in the conservative movement that is trying to delegitimize the opposition to Trump in many quarters and pass the blame to others,” said David Gergen, who has advised presidents in both parties.

Here’s what you need to know amidst all the chatter about a Deep State.

What is a Deep State?

The term, which emerged toward the end of the 20th century, was originally used to describe a shadow government in Turkey that disseminated propaganda and engaged in violence to undermine the governing party, often coordinating with people who were not part of the government.

“When we say ‘Deep State’ it has this really sinister pernicious meaning,” said Nate Schenkaan, a project director at Freedom House — which advocates for democratic, political and human rights — and author of Democracy in Crisis: Corruption, Media and Power in Turkey.”[It] included mafia leaders organizing military leaders to attack minorities, to kill and torture people, and they were used by elements of the state because it gave the state ways to get around the legal structure.”

Mike Lofgren, a former longtime Republican congressional staffer and author of The Deep State: The Fall of the Constitution and the Rise of a Shadow Government, has used the term in the context of American politics, albeit in a much less physically threatening way: to describe members of the public and private sectors who influence government policy, including career public servants in the intelligence community. Glenn Greenwald, the journalist who reported on Edward Snowden’s NSA leaks, has also used the term in reference to U.S. politics. “The Deep State unleashed its tawdriest and most aggressive assault yet on Trump,” he wrote in January, after revelations that Trump was briefed that Russia could have compromising information about him.

What has the Trump Administration and its allies said about a “Deep State”?

Trump himself hasn’t used the phrase in public. Most references from the President himself have been more subtle, alluding to conspiracy theories, like Saturday’s tweet-storm accusing Obama — without any evidence — of wiretapping Trump Tower before the election, or pondering on social media why intelligence officials are apparently leaking information to the media. What Trump accused Obama of would be a federal crime and there are safeguards in place to prevent Presidents from ordering this kind of surveillance.

Other reports, including a recent one in the Washington Post, suggest that people close to Trump believe these longtime government workers amount to a “Deep State” that could threaten his presidency.

Breitbart, the far-right website Bannon used to run, has published numerous articles about an alleged “Deep State” aligned against Trump, including one recapping conservative radio host Mark Levin’s theory that Obama loyalists are waging a “silent coup” against Trump. That article was widely speculated to be the source of Trump’s wiretapping accusation against Obama.

Congressional allies have used the term as well.

“We are talking about the emergence of a Deep State led by Barack Obama, and that is something that we should prevent,” Iowa Republican Rep. Steve King told the New York Times. And Kentucky Republican Rep. Thomas Massie said on CNN that the government is trying to provoke Trump into a conflict with Russia. “I think it’s really the Deep State versus the President, the duly elected President,” he said.

OK, but does this really amount to a “Deep State”?

Experts said that using the term this way — rendering a federal bureaucracy synonymous with a “Deep State” — not only deviates from its original intention, but isn’t describing a sinister or even a new dynamic. Career civil servants, whose appointments are non-political, have always played a big role in formulating policy. And they’ve always leaked details of said policy to the media. Senior members of the Trump White House also regularly leak favorable information and go off-the-record with reporters, despite their protestations about leaks.

“[The White House] is taking a sexy term that means something very real in an environment in which there has been a lot of violence associated with this term and we’re applying it to stuff that’s pretty normal in terms of a large bureaucracy,” said Schenkaan, the Freedom House project director. “These are state employees and they have been implementing their jobs faithfully for a long time.”

Timur Kuran, a professor at Duke University who has also studied the dynamic in Turkey, said that leaks would only be evidence of a Deep State if there was definitive proof they were all interconnected and connected to a conspiratorial plot. There is no evidence of that.

“[Leaks are] evidence of people upset with the bureaucracy and upset with individual policies, but doesn’t in itself point to an organizational hierarchy to systematically undermine the government,” Kuran said.

Gergen noted that Trump came into office with a mandate to rip up the old model of government — the same model in which many of these civil servants have spent their entire careers — so its only natural there would be pushback.

“Changing the status quo is hard and he’s finding it is harder than it looks to change the culture of government,” Gergen said. “But that doesn’t mean there is some sort of conspiracy going on.” 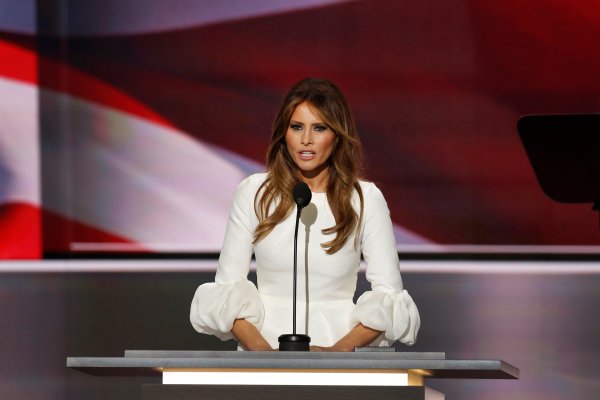 3 Times Donald Trump's Team Got Hit With Plagiarism Charges
Next Up: Editor's Pick