50 Years Ago This Week: The Redgrave Sisters Take America

A new name was lighting up the mental marquees of culture watchers in early 1967: Redgrave. Well, actually, it wasn’t new at all — Sir Michael Redgrave was already one of England’s most respected thespians, and his wife Rachel had a career of her own — but it was much more visible. The two Redgrave daughters had crossed the pond and gone Hollywood, introducing larger audiences to theatrical talents that had been limited to those with access to London’s theaters. (Their brother Corin was just getting into the business as well.)

The year 1966 had seen the comedic chops of the “madcap mimic” Lynn, then 24, on display in Georgy Girl and a “sense of mystery and radiance in her presence” leading Vanessa, 30, to shine as a leading lady in Morgan! and Blow-Up. Both were nominated for Best Actress at the upcoming Oscars.

But, as TIME explained in a cover story, Redgrave-mania was about more than two individual talents:

As for the Oscars, the awards provided no fodder for sibling rivalry: the prize went to Elizabeth Taylor for Who’s Afraid of Virginia Woolf?

Two views on Vietnam: An article in the national news section neatly summed up the two prevailing, competing views on the War in Vietnam within the U.S. government. On one side, President Lyndon Johnson made the case to the world that the best way to get North Vietnam to the bargaining table for peace talks was to make it clear that, otherwise, military force used by the U.S. would only grow. On the other side were those championed by Sen. Robert Kennedy, who held that the way to convince the world to take peace seriously was to halt bombing. As LBJ and RFK faced off over the disagreement, the President was rumored to have told the Senator that the conversation was effectively over: “I never want to see you again,” he was reported to have said.

Jimmy in jail: Teamsters Union boss Jimmy Hoffa had just begun his time in jail, after a decade running the union—a decade full of success for the teamsters but near-constant legal battles for Hoffa, over “questionable associations with gangsters, shady deals with employers and flagrant misuse of union funds.”

Stalin surprise: In a shocking Cold War subplot, Josef Stalin’s daughter Svetlana, who had not been in the public eye for years, had suddenly reappeared—in an attempt to defect to the West. At a moment that was inconvenient for both the USSR and the U.S., she left her children in Moscow and made her way out of the country.

Health goal: The U.S. government announced the goal of eradicating measles by the end of the year. (Spoiler alert: they failed, and even the elimination of measles in the U.S. in the year 2000 wasn’t the end of the story, as the U.S. has seen hundreds of cases in recent years, including a much-publicized outbreak at Disneyland.)

Great vintage ad: This one, from Lockheed, is just plain weird.

Coming up next week: Martin Luther 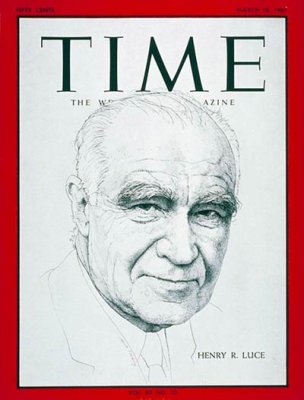 50 Years Ago This Week: Henry Luce and the End of an Era
Next Up: Editor's Pick