A model walks the runway during the Balenciaga Ready to Wear fashion show as part of the Paris Fashion Week Womenswear Fall/Winter 2017/2018 on March 5, 2017.
Victor Virgile—Getty Images
By Raisa Bruner

As models paraded down the Parisian runway this weekend for the brand’s ready-to-wear fashion show, they were outfitted in pointy-toed stilettos with knotted fabric covers. Some of them, in a cheeky nod to the politician, were adorned with “Balenciaga”-branded scraps of cloth bearing the same graphics that Sanders’s campaign used.

This is not the first time designer Demna Gvasalia has felt the Bern; at his men’s show in January he took even heavier inspiration from the Sanders logo, with shirts and outerwear styled in the red, white, and blue typography that Sanders touted throughout his attempt at the White House. Vogue says those leftover t-shirts were used on the heels.

The irony, of course, is that while Balenciaga heels like the ones seen on the runway retail for upwards of $600, democratic socialism-leaning Sanders himself is notoriously low-fashion.

“I think, of my many attributes, being a fashion maven is not one of them,” he told CNN’s Jake Tapper last month. Whether or not he sought this status, looks like fashion is still having its Bernie moment. For Sanders fans trying to copycat this style on the cheap, Racked notes, you’re in luck: just repurpose your old campaign t-shirt into a shoe cover. 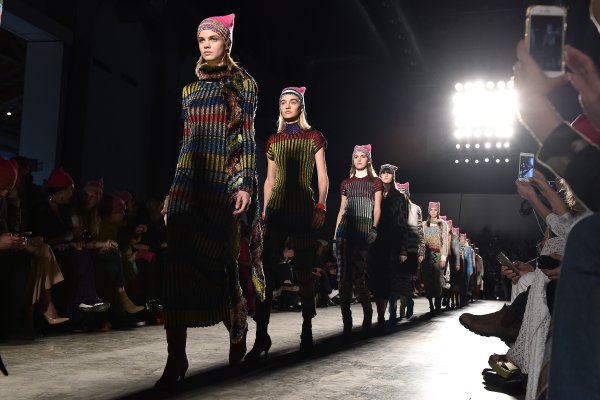 The Women’s March 'Pussy Hats' Made an Appearance on the Missoni Runway
Next Up: Editor's Pick