Katy Perry stunned on the red carpet at Sunday’s iHeartRadio Music Awards and brought her latest single “Chained to the Rhythm” to the stage yet again in her first public appearance since she announced her split from Orlando Bloom.

Perry, 32, has been busy promoting the song, also performing at the BRIT Awards in the U.K. and the Grammys in Los Angeles.

She even sported a new ‘do — plus a pantsuit — at the annual show, flaunting herblonde pixie haircut with an Instagram story captioned “turning a new leaf.” She initially revealed the hair style in another Instagram post, writing, “I WASNT READY TILL NOW.”

After radio host Elvis Duran remarked on scrutiny of her new look, Perry joked, “Well yeah, if you’re going this extreme it should, hello! I’m trying to get more attention, obviously. You can just grow it back. Honestly, I tried to take my full head of hair platinum and I had a lot of breakage. I’ve always wanted to look like Miley Cyrus. I’ve always wanted to have that pixie haircut, so I said, ‘Let’s just go for it.’”

She added, “I feel like there’s a new wave, a new authentic vibe coming in and I think this matches. I want to redefine what it means to be feminine. Look at Scarlett Johansson, who’s one of the most beautiful women in the world. We have the same haircut and I saw her at an Oscars party and was like, ‘I’m doing it.’ You’re hot, you can be hot and look great with this kind of hair. Why not?”

In true Perry fashion, the “Teenage Dream” singer gave another high-energy performance — featuring child dancers dressed as factory workers and a giant inflatable hamster. “I used to be the queen of innuendo, kind of like a wink-wink sexual concentration,” she told Duran on the red carpet. “It feels like I’m diversifying now and having more subtext about many different subjects.”

She later told Ryan Seacrest backstage, “I’m 32 now and I feel great. I’m really accepting of myself and I’ve done a little work in that area and it’s really paying off because I’m having fun and feeling free. I feel the most authentic I’ve ever been.”

RELATED LINK: Before the Break: A Look Back at Katy Perry and Orlando Bloom’s Cutest Photos Together

Just days before the show, Perry took to Twitter to shut down any rumors of a drama-filled breakup with Bloom.

“Before rumors or falsifications get out of hand, we can confirm that Orlando and Katy are taking respectful, loving space at this time,” both their reps said Tuesday in a statement to PEOPLE.

All seemed to be well in the pair’s relationship as Bloom, 40, celebrated Perry’s 32nd birthday with her in October and the former love birds spent time with each other’s families. Bloom and Perry jetted off on PDA-filled vacations and even went all out for Halloween together.

However, a Perry source recently told PEOPLE that the romance was “never really supposed to be serious.”

“When it first started, she was basically like ‘This will be fun for now,’ ” the source sad. A insider close to Bloom told PEOPLE that the actor was “happy and content” spending time with Perry, but “was not in the mindset to settle down.”

Bloom’s pal said that the relationship had been “shaky” for awhile, adding that there was “nothing dramatic or over the top,” but the stars simply drifted apart.

The Perry source noted that the relationship “just became more and more work to make it work.”

“This really wasn’t a bad breakup for her,” the source said. “[Her split from John Mayer] was a lot harder for her. This just ran its course.”

The pair began dating back in January 2016 with a source telling PEOPLE then that they looked “very happy.” They grew closer throughout the year, and a source told PEOPLE in August: “[Bloom] would love to settle down with Katy and have more kids.” 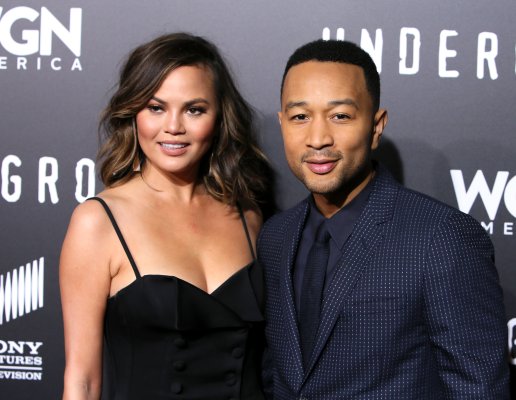 Chrissy Teigen Opens Up About Her 'Painful' Battle With Postpartum Depression
Next Up: Editor's Pick