This photo taken on Feb. 13, 2017 shows people in Pyongyang watching a public broadcast about the launch of a medium long-range ballistic missile.
Kim Won-Jin—AFP/Getty Images
By Charlie Campbell / Beijing

In the majestic belly of Beijing’s Great Hall of the People, where all of China’s top political figures are currently gathered for the annual National People’s Congress (NPC) legislative session, Premier Li Keqiang kicked off proceedings Sunday by warning of “more complicated and graver situations” and “many uncertainties … both inside and outside China.”

Right on cue, North Korea gave a perfect example: launching four ballistic missiles some 1,000 km into the sea off its eastern coast on Monday, three of which fell within Japan’s Exclusive Economic Zone. They are believed part of tests to develop a nuclear-armed missile capable of hitting the U.S. mainland.

The timing of the launch during China’s biggest political event of the year will no doubt irk the Beijing leadership. But it was likely also prompted by the huge military drills that have just kicked off between Washington and Seoul, which Pyongyang insists are a dress rehearsal for invasion. In response, North Korea’s state news agency KCNA had already threatened to “turn the stronghold of provocation into a heap of ashes through [a] preemptive nuclear strike.”

“It wouldn’t be the first time North Korea has done something like this,” says Daniel Pinkston, an East Asia specialist at Troy University in Seoul, of the missiles’ timing. “There is the political dimension to these types of missile tests.”

The Chinese leadership will be especially piqued as its relations with North Korea have reached a historic low. On Feb. 19, Beijing halted imports of coal — the Kim regime’s main cash cow, bringing in some $1 billion annually — for the rest of the year. That brings China into line with the unprecedented U.N. sanctions it signed up to in March 2016, but which have only been spottily implemented so far. Pyongyang responded by accusing its increasingly reluctant sponsors of “dancing to the tune of the U.S.”

“This is the first step that really has significant economic consequences,” says James Nolt, an East Asia expert at the World Policy Institute. “Up until now most Chinese opposition has been rhetorical and diplomatic.”

The change in Chinese attitude appears spurred by the assassination of Kim Jong Nam — elder half-brother to Kim Jong Un — using VX nerve agent in Kuala Lumpur International Airport on Feb. 13. Kim Jong Nam lived mostly in the semiautonomous Chinese territory of Macau and was believed under the protection of Beijing.

But continued North Korean belligerence has strategic repercussions for China, as it led South Korea to agree to host a battery of the U.S. Terminal High Altitude Area Defense (THAAD) antimissile defense system, which Beijing deems part of an American strategy of containment.

China is stridently against the THAAD deployment, even turning its ire on Japanese–South Korea conglomerate Lotte, which has offered land to be used for THAAD. Chinese nationalists have launched a boycott of Lotte that has (at least tacit) government approval. Lotte has five department stores and around 100 supermarkets in China, and makes almost a third of revenue from the Chinese market.

“We have completely scrubbed the name of Lotte from our website,” Chen Ou, founder and chief executive of Jumei Youpin, China’s largest online cosmetics vendor, posted on China’s Twitter-like microblog Weibo last week. “I won’t sell them in the future even someone beats me to death.”

Read More: The World Can Expect More Cybercrime From North Korea Now That China Has Banned Its Coal

But Pyongyang’s continued missile tests undermine Chinese arguments that THAAD is unnecessary. Beijing repeatedly calls for a return to the six-party denuclearization talks — comprising North and South Korea, Japan, Russia, China and the U.S. — which ran from 2003 to 2009 before being nixed by Kim Jong Il, former leader and father to Kim Jong Un and Kim Jong Nam.

However, Monday’s launch just days after the coal freeze is further evidence that nothing can persuade the regime against its pursuit of nuclear weapons, which the 33-year-old Kim believes guarantees the survival of his family dynasty. China has not offered any meaningful alternatives to THAAD other than the bromide of “talks.”

“There’s quite an asymmetry to China’s response to events on the Korean peninsular,” says Pinkston. “What other measures [apart from THAAD] could South Korea take? Because this is a serious, existential threat. I never hear anything from the Chinese. It’s hypocritical and undermines China’s reputation around the world.”

This is especially damaging as China attempts to recast itself as a global player in light of the election of U.S. President Donald Trump, who has vowed to draw down expensive military commitments oversees and embrace a nativist economic policy. The stage is set for Beijing to pick up the mantle. When Xi Jinping became the first Chinese leader to address the World Economic Forum in Davos on Jan. 17, he said, “We must remain committed to developing global free trade and investment, promote trade and investment liberalization and facilitation through opening-up and say no to protectionism.”

Read More: Backlash Over THAAD Shows Why the Kim Clan Have Terrorized North Korea for So Long

However, such assertions come in stark contrast to China’s petty retaliation against South Korea. On Sunday, Premier Li cut China’s growth forecast to “about 6.5%” — its lowest rate in 26 years. In an era of growing protectionism in the U.S. and Europe, China will be looking overseas to guarantee its future prosperity. Continuing to support North Korea regardless of its endless provocations undermines this goal and China’s attempts to appear a reliable international partner.

“China will always stand on the side of peace and stability, will forever be committed to equity and justice, and will always work for world peace, contribute to global development, and uphold the international order,” Li said on Sunday. “China is a responsible country.”

There is no better time to prove it. 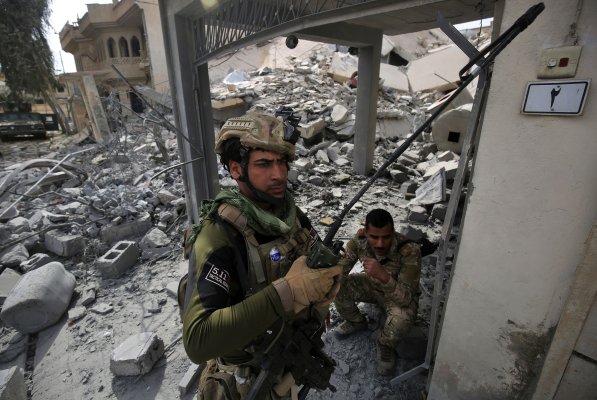 The 5 Key Players in the Battle for Mosul
Next Up: Editor's Pick