A scene from Beauty and the Beast.
Laurie Sparham—Disney
By Nick Romano / Entertainment Weekly

According to Bill Condon, too much has been made over Beauty and the Beast‘s “exclusively gay moment.”

The director first announced Josh Gad’s LeFou would come out of the closet in a recent issue of Attitude magazine, giving Disney its first openly gay character. At the time, he referred to it as “an exclusively gay moment,” but has since downplayed his past remarks during an interview with ScreenCrush.

“Oh God. Can I just tell you? It’s all been overblown. Because it’s just this, it’s part of just what we had fun with,” he said. “You saw the movie, yeah? You know what I mean. I feel like the kind of thing has been, I wish it were – I love the way it plays pure when people don’t know and it comes as a nice surprise.”

Spoiler warning for Beauty and the Beast: The scenes in question involve LeFou subtley flirting with Luke Evans’ Gaston, and the end shows him dancing with another male character. “He’s confused about what he wants,” Condon explained to Attitude, which revealed the news as a “world premiere” and “watershed moment” in the original article. “It’s somebody who’s just realizing that he has these feelings. And Josh makes something really subtle and delicious out of it. And that’s what has its payoff at the end, which I don’t want to give away. But it is a nice, exclusively gay moment in a Disney movie.”

Since news broke, the Alabama-based theater Henagar Drive-In canceled its screenings of Beauty and the Beast over LeFou. “If we cannot take our 11 year old grand daughter and 8-year-old grandson to see a movie, we have no business watching it,” the new owners wrote in a message on Facebook. “If I can’t sit through a movie with God or Jesus sitting by me, then we have no business showing it.”

BBC further reports the film may not screen in Russia, given the country’s law that bans what Russian officials deem “gay propaganda” to minors.

Gad remarked to USA Today on the film’s premiere, “There was nothing in the script that said ‘LeFou is gay.’” Condon, too, echoed his comments to ScreenCrush: “To me, I have to say my heart sinks a little. I like the idea of it coming as this surprise, and I hope people don’t know where it’s coming.” 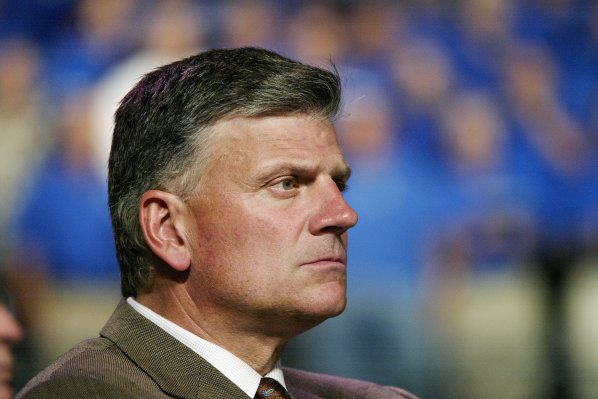 Franklin Graham Wants People to Boycott Beauty and the Beast Over Gay Character
Next Up: Editor's Pick