Look out for the bouquet!

Meghan Markle partied with some of Prince Harry’s closest pals at the wedding of one of his best friends in Montego Bay, Jamaica on Thursday.

The couple is in the Caribbean to witness the wedding of Tom “Skippy” Inskip and literary agent Lara Hughes-Young. Inskip and Harry are childhood friends — they met at Eton College and Inskip is popularly said to have been Harry’s “wingman” on rowdy evenings out during their younger days.

For the nuptials, Markle wore a long floral dress and sunglasses as the royal, who was one of 14 ushers, suited up in a navy blue blazer and trousers.

For Markle, it is thought to be the first time she has accompanied Harry to a wedding and it marks something of a public coming out for the couple.

But she will fit in well as she has already met most of Harry’s closest friends in London during restaurant and theater dates over several months of dating.

During the wedding, an onlooker tells PEOPLE that the two shared plenty of PDA, including a sweet kiss.

“Harry and Meghan seem very much in love,” the source said, adding that Harry spent much of his time introducing Markle to friends during the “joyful” wedding.

At one point, the onlooker says that Harry got up and “did a little dance” for Markle.

According to local reports, Harry – accompanied by a heavy security detail, as the Jamaica Observer put it — arrived at the international airport at Montego Bay on Wednesday afternoon. Markle is believed to have flown in separately from her home in Toronto. The outlet says that the royal is planning to stay in the Caribbean for a week.

The wedding party is thought to be staying at the Round Hill Hotel and Resort in Montego Bay. The 110-acre private enclave features luxury villas and oceanfront rooms.

After spending a romantic break with Harry in Norway, Markle spent much of January and February in London with Harry — staying at his Nottingham Cottage in Kensington Palace — but she returned to Toronto to prep for the filming of the next season of Suits in mid-February.

“It just feels very natural for them both,” a source told PEOPLE of the duo’s dynamic. “It feels easy — like they’ve known each other for a long time.”

Markle posted on Instagram earlier this month after a two-month hiatus from the social media platform, sending a positive message to her followers alongside a photo of her too-cute Charlotte Olympia cat flats below the text “#NOBADENERGY.”

“Sending good vibes — always in all ways,” she captioned the snap.

Representatives for Kensington Palace and Markle would not comment. 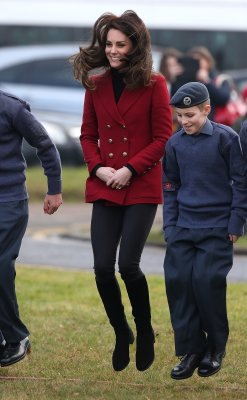