Why You Should Say 'No' More Often

Motto readers already know Stacey Griffith for her Monday morning columns offering advice on everything from at-home workouts to heart health to maintaining a positive attitude. Now, she’s sharing her writing in a whole new way, with her first book, Two Turns From Zero, about taking the energy and power derived from fitness and applying it to all areas of life. The book, out Tuesday, shares Griffith’s own story: She launched her fitness career at age 18, teaching an abs class at the YMCA. From there, she caught onto the early wave of indoor cycling, and is now a senior master instructor at SoulCycle. “It’s about really connecting your mind and your body,” Griffith says of her book. “Take those creative thoughts, and convert them into action.” Here, an excerpt.

“Saying no can be very empowering.”

Of course yes is a powerful word, but so is no. By saying no to things that aren’t aligned with your intentions and goals, you are reinforcing and making space for what is important to you. Saying no to the things that take away from your goals creates space for them and tells the universe you are focused on them.

Because women, in particular, are programmed early on to be more docile than men — for fear of being called pushy, over- bearing, or selfish — even though, of course, they’re not (and a man would never be called any of those words!) — they often have a hard time saying no. We are just conditioned to live in the House of Yes. But we still need to spend time in the House of No. It is important to know what you need to say yes to (the things you need to do to achieve your goals) and what you need to say no to (the things that are wasting your time or taking away from those goals).

When setting your intentions and defining your goals, and when used in the right context and for the right purpose, no can be very empowering. Especially if you aren’t used to saying it. It is a firm statement and an acknowledged choice that gives you a jolt of adrenaline (which is a potent appetite suppressant, by the way).
It also means you’re fully engaged in the now.

I’ve found that many of my students have a difficult time saying no. It’s an avoidance technique that allows them to put off being honest about what they really want if they think it’s going to upset someone. There’s that fear that someone’s going to react in a bad way and that you’re going to have to deal with the repercussions of their anger; plus, you don’t want to make people upset . . . so you say yes so they’re not upset and you end up unraveling something in your day to compensate for having to take care of someone else’s needs rather than your own.

That said, there’s often a fine line to walk to ensure you’re saying no for a valid reason. You might not want to say no, but logistically, it’s just impossible to say yes. If so, try saying, “I might not be able to get to today, but how about tomorrow?” Or “I can’t do this, but how about I help you with that?”

The answer is still no in the now, but is still making clear that you are available according to both of your schedules. You’re offering alternatives, sort of the way you’d give a stubborn child the choice of three shirts to wear in the morning instead of saying, “No, you can’t wear that.”

Use your no to give someone else a choice — because what you want to avoid is falling into the trap of saying yes to please someone else, and then creating chaos in your own life as a result. This can quickly veer into martyr mode, where you’re doing things out of a sense of obligation and using that to avoid dealing with your needs and your goals. My theory is to manage both the answer yes and the answer no, without feeling guilty about either! 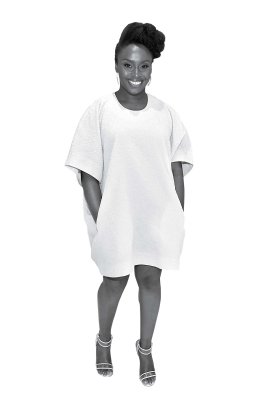 10 Questions With Chimamanda Ngozi Adichie
Next Up: Editor's Pick