‘Scrambling in Terror.’ PETA Slams NHL’s Use of Real Penguins at Pittsburgh Game

Animal activists have come down on the National Hockey League after real penguins were released on ice and appeared “terrorized” by pyrotechnics at a Pittsburgh Penguins pregame show earlier this week.

People for the Ethical Treatment of Animals (PETA) penned a letter Thursday to the hockey team, slamming its use of the live animals at Heinz Field in Pittsburgh before the Pittsburgh-Philadelphia showdown Saturday. At one point, some of the penguins appeared startled by pyrotechnics fired around them, video shows.

“It’s inherently stressful for wild animals — who naturally shun contact with humans and are extremely sensitive to environmental changes — to be hauled around, used as props, and exposed to noisy crowds, with or without explosives going off,” PETA’s letter said, according to the Pittsburgh Post-Gazette. “Hockey fans come to see talented athletes compete, not shy animals terrorized.”

The group urged the NHL to never again use live animals for entertainment purposes. PETA said the penguins were “scrambling in terror after being paraded in front of a screaming crowd and in close proximity to ear-splitting fireworks.”

The penguins were from the Pittsburgh Zoo and PPG Aquarium, which said the animals were “very comfortable around people and noises.”

“In addition, it was a great enrichment opportunity for our penguins to be introduced to new sounds, sights and smells,” the zoo said in a statement to the Post-Gazette. “The loud pop from the pyrotechnical display temporarily startled the penguins and their first reaction, similar to a human’s when startled, they flapped their wings. It was less than 10 seconds and the penguins were back to normal and exploring and playing on the ice.” 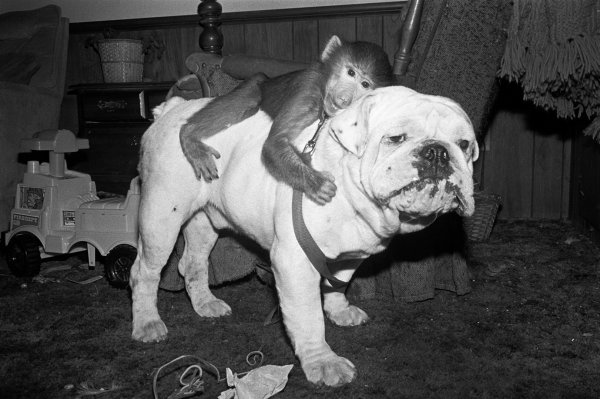 The Art of Photographing Animals Like Humans
Next Up: Editor's Pick