First things first: the uproar over Hillary Clinton’s emails has always been — and continues to be — one of the most absurd faux scandals in American politics. Of all of the reasons people conjured to vote against the former Secretary of State, her use of a dot-com over a dot-gov email address seemed to have its biggest sting in symbolism instead of substance.

That said, there is no shortage of Schadenfreude and snark emanating from the disclosure by The Indianapolis Star that, as Governor of Indiana, Mike Pence used an AOL account to conduct some state business. Here, critics of the Vice President contend, is proof that Pence is a hypocrite and did the same thing Clinton did.

It’s not that simple, no matter how delightful a sound-bite it may make. “He did everything to the letter of the law in Indiana, turned all of his emails over, unlike Hillary Clinton who lost at least 30,000 — who knows how many more?” White House spokeswoman Sarah Sanders told reporters Friday. “That’s apples-to-oranges comparison.” And, in this, Sanders is correct.

Here is a guide to the problems of comparing Pence and Clinton.

Pence was a Governor. Clinton was in the Cabinet. Not to discount the Hoosier State’s CEO, but Pence wasn’t exactly trading in state secrets. One email published by the Star has Pence discussing a terror-related arrest — which was already being covered publicly by the media. Another discussed the gate locks at his residence. Clinton, on the other hand, had the nation’s best secrets. She was the subject of an FBI investigation into whether she mishandled that classified information. (Spoiler alert: she was not charged even though it was clear the FBI did not approve of her filing system.)

Using private email was legal in Indy. Using private email was discouraged at the State Department. Indiana law explicitly forbids government employees such as the Governor to conduct politics on state accounts, so it’s credible to argue Pence had no other options. That is in contrast to the State Department, where government rules strongly encourage employees to do their jobs on state.gov email accounts that are archived and subject to review.

Pence signed up for a commercial service. Clinton built her own server in a basement. Here, the distinction is fairly cosmetic. Pence used an AOL account — a choice that has people who study such practices debating the cult-like devotion of AOL users — as his go-to account for mobile use. Clinton set up a private email system that ran from her house in Chappaqua, N.Y. Much has been made of her home-brew setup for clintonemail.com, but it required significantly more effort to establish and maintain than signing up on a public site. (Both, it should be noted, could have been hacked. Pence’s account was, and officials strongly suspect Clinton’s was, too.)

People generally trust Pence. That’s not the case with Clinton. Even Pence’s political rivals in Indiana say he’s a good man and was predictable in his strictly conservative approach to politics and the law. Clinton has never enjoyed the benefit of the doubt. Stretching back four decades, the American voter has been conditioned to assume the worst about Clinton, which is why her use of a private email system played into the conservative storyline that she is not to be trusted. Pence, by contrast, gets a pass.

Pence was an unexpected addition to the Trump ticket. Clinton advisers always assumed she would run for President again. Pence had considered a 2012 campaign of his own but opted to stay in Indiana, where he had solid approval ratings and a legislature that was cooperative even when it wasn’t compliant. Pence the arch-conservative was an unlikely partner for Trump, a New York billionaire whose political ear was significantly to the left of Pence. Clinton, however, was widely expected to try once more for the White House, even as she resigned from the Senate to serve as Barack Obama’s global diplomatic rock star. In fact, her choice of a private email server was in part designed to shield her messages from scrutiny when she moved back to campaign life.

Pence’s disclosure came after the campaign. Clinton’s came during it. While the timing shouldn’t matter in the eyes of the law, it’s the only thing that matters in a political environment. Pence is now the Vice President. No one is credibly arguing his use of an AOL account deserves any discussion of being disqualifying. Clinton’s emails became an issue during a campaign, when even the slightest hint of impropriety morphed into a Watergate-caliber outrage. (And not just by Republicans. Plenty of Bernie Sanders’ supporters got in on that game.)

Finally, size matters. We’re talking about 30 pages of Pence emails that he forwarded from his AOL account to state archivists. Clinton? She handed over 55,000 pages to the State Department. 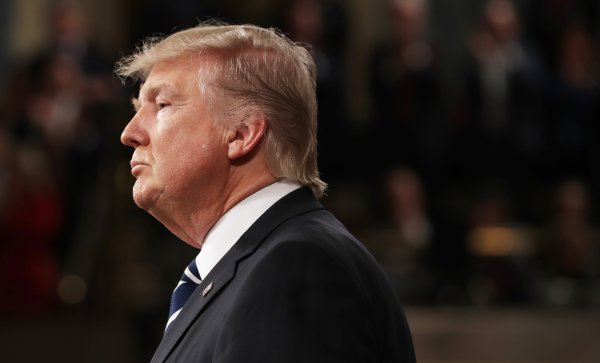 Trump Hits Back With Photo of Schumer and Putin
Next Up: Editor's Pick