What to Know About Juan Thompson, the Man Accused of Threatening Jews to Frame His Ex-Girlfriend

Federal authorities on Friday arrested a man who they say is behind a rash of recent bomb threats to Jewish centers in New York City.

Juan Thompson, 31, of Missouri, allegedly made more than a half-dozen threats in his ex-girlfriend’s name to frame her as part of a revenge scheme, the FBI and U.S. Attorney’s Office said. He was arrested early Friday in St. Louis and is being charged in New York with cyberstalking.

Here’s what we know about him:

He’s accused of making the threats to harass his ex-girlfriend
Thompson allegedly made at least eight threats to Jewish centers, including the Anti-Defamation League’s (ADL) headquarters, in the past two months, according to the FBI and the U.S. Attorney’s Office. Authorities say it was part of his mission to frame and harass his ex-girlfriend after their relationship ended.

Thompson is accused of emailing the ADL in late February, saying the woman “is behind the bomb threats against jews.” “She lives in nyc and is making more bomb threats tomorrow,” the email said, according to a criminal complaint. The ADL then received a phone call the next day claiming a bomb was inside its Manhattan office.

He tweeted about his ex-girlfriend
Federal prosecutors said Thompson apparently tweeted claims that his ex-girlfriend tried to frame him for the bomb threats. He wrote on Feb. 24 that his ex “even sent a bomb threat in my name to a Jewish center,” which he said prompted a visit from the FBI. A Jewish center in New York did receive messages that a Juan Thompson planted bombs in its office, but officials say the unfounded warning in fact came from Thompson. Prosecutors say he was pretending to be his ex-girlfriend to make it seem like she was trying to frame him for the crimes.

He also tweeted about Jewish center bomb threats
Thompson condemned anti-Semitic acts that have played out across the country in recent months. He tweeted “the hatred of Jews goes across all demos” before accusing his ex-girlfriend of being anti-Semitic.

He was fired from his journalism job
Thompson used to work as a staff reporter for the Intercept before the news organization fired him last January for fabricating sources and quotes in stories. The Intercept confirmed Thompson’s former employment in a statement Friday that said the staff was “horrified to learn” about his arrest. “These actions are heinous and should be fully investigated and prosecuted,” the statement said. The Intercept said Thompson was an employee from November 2014 to January 2016.

He has said he is against President Trump and white people
Thompson has tweeted his opposition to President Donald Trump several times. He has also ranted about white people on his Twitter account, calling them “trash.” The ADL said Thompson last year announced plans to run for mayor of St. Louis, his hometown, to “fight back against Trumpian fascism.” The civil rights group, which has been monitoring Thompson, said the suspect “became more hostile to whites in general” after he was axed from The Intercept. Thompson used to live in New York City, where he and his roommate apparently hosted a TV show and discussed issues like bigotry, according to the ADL.

Thompson did not immediately return a request for comment Friday. It’s unclear if he has a lawyer. 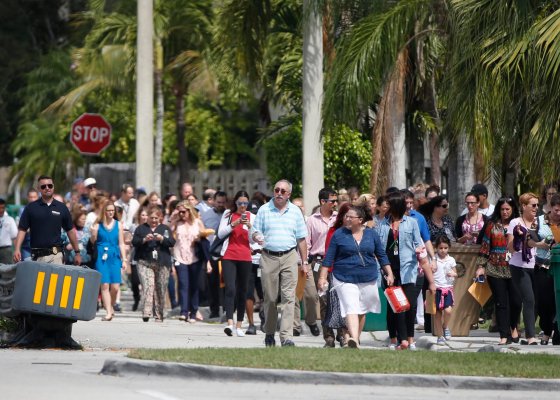