It’s China’s biggest annual political event, though rarely the scene of high drama, with delegates unerringly voting in line with the Chinese Communist Party (CCP) leadership. And this year’s gathering is looking particularly underwhelming, summed up as it is by that least buzzy of buzzwords: stability.

Last month, the CCP Political Bureau, where party bigwigs discussed the draft government Work Report to be announced at the NPC — containing all the stats and figures for the prior year and targets ahead — said its aim for 2017 was “seeking progress while maintaining stability.”

That’s not exactly “Make America Great Again,” and in many ways the surprise election of Donald Trump as U.S. President has contributed to the temperate tone. Trump’s broadsides about the U.S. trade deficit with China costing America jobs and threats to impose 45% tariffs on imports has taken the Chinese leadership aback. And although the real estate mogul has tempered his vitriol since his inauguration, his speech to the Congress on Tuesday duly noted, “we’ve lost 60,000 factories since China joined the World Trade Organization in 2001.”

“For the Chinese, there’s a lot of concern right now about what the Trump administration might bring,” says James Nolt, an East Asia expert at the World Policy Institute. “They prefer stability but a large part of the Chinese economy depends on engagement with the outside world, and that’s the sector they can’t control.”

That unpredictability is especially worrisome for Chinese President Xi Jinping this year with the 19th five-yearly CPP Congress due in the fall. Most of the Politburo Standing Committee — the nation’s top executive body — is expected to be replaced and the Party’s ideological direction honed. A trade war or other conflict with the U.S. would be an unfortunate distraction when Xi must appear in cruise control.

“President Xi is not looking to introduce bold new reforms that might detract from his campaign to appoint allies to key posts during the upcoming leadership shuffle,” says Eurasia Group’s China Director Michael Hirson.

The specter of Trump is especially menacing due to China’s already slowing economy; last year’s Work Report gave a historic low growth forecast of “about 6.5%.” The big question is whether this year will be significantly lower. Though the overall mood has been lightened somewhat after China’s top diplomat, Yang Jiechi, met Donald Trump and held talks with senior advisers at the White House on Monday.

“I think the Chinese were very pleased with how these meetings went,” says Amy Celico, head of China practice at the Albright Stonebridge Group. “Because the level of concern in Beijing about U.S.-China relations has been very, very high because of the unpredictability of the new administration.”

The NPC will also give some indication whether domestic Chinese policy is reacting to the Trump administration. Concerns over China keeping key sectors of its economy closed off to foreign investment drummed up support for Trump’s march to the White House. A recent 20-point directive from China’s State Council contained provisions for addressing some of these concerns — deliberate or otherwise — by allowing foreign investors to play a bigger role, with an explicit commitment to financial services openings. In the insurance sector, there have been reports the government is considering lifting equity caps.

“There are some interesting proposals floating around,” says Nicholas Consonery, head of Asia geopolitical intelligence at FTI Consulting business advisory firm. “We’ll be looking for more clarity [on these] from the government.”

The CCP will also be trying to shrug off the parasitic image attributed to China by the Trump administration, which has repeatedly said that the Beijing “steals” American jobs through unfair trade practices like currency manipulation. At the recent CPAC meeting, chief White House strategist Steve Bannon reaffirmed Washington’s commitment to a nationalist economic course.

In a press conference to open the National Committee of the Chinese People’s Political Consultative Conference (CPPCC), which directly precedes the NPC, CPPCC spokesperson Wang Guoqing was keen to highlight that, “In 2016, the Chinese economy contributed to 33.2% of world economic growth.”

According to Nolt, behind closed doors the Chinese leadership will be considering what further options may be on the table if Trump tries to make good on some of his campaign promises. “The idea of restricting trade from China must be very alarming,” he says.

While American manufacturing has been falling steadily since the 1960s, American agriculture today relies heavily on Chinese consumers. If Trump attempts to target China’s trade, that might be an avenue of response.

“Trump has an ‘America first’ policy and Xi has a ‘stability first’ policy,” says Consonery. “The question for this year is whether those to things will be contradicting each other.” 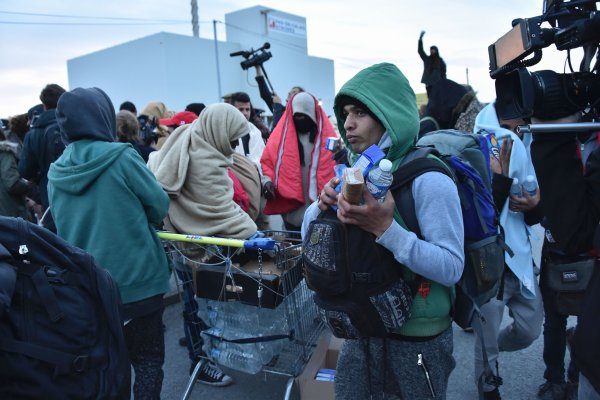 Calais Mayor Bans Charities From Handing Out Meals to Migrants
Next Up: Editor's Pick