What to Know About Jeff Sessions and Russia

Attorney General Jeff Sessions found himself in middle of a political firestorm this week when the Washington Post reported that he had met twice with the Russian ambassador to the U.S. during the presidential campaign, despite seeming to deny this during his confirmation hearing.

Lawmakers on both sides immediately jumped on Sessions and called for him to recuse himself from Russia investigations or resign. Sessions announced Thursday afternoon that he would recuse himself from investigations into President Donald Trump‘s campaign, but maintained he did not lie in his hearing and did nothing wrong in meeting with the Russian ambassador. Trump defended his Attorney General on Thursday evening, accusing Democrats of waging a “total witch hunt.”

Here are the answers to six questions about the controversy.

In an article published Wednesday night entitled “Sessions met with Russian envoy twice last year, encounters he later did not disclose,” the Post wrote that then-Senator Sessions met twice with the Russian Ambassador to the U.S. Sergey Kislyak in 2016. The paper said Sessions met with Kislyak once in July and once in September.

What exactly did Sessions say in his confirmation hearing?

Democratic Sen. Al Franken of Minnesota asked Sessions, “CNN just published a story alleging that the intelligence community provided documents to the president-elect last week… These documents also allegedly say quote, ‘There was a continuing exchange of information during the campaign between Trump’s surrogates and intermediaries for the Russian government.’… If there is any evidence that anyone affiliated with the Trump campaign communicated with the Russian government in the course of this campaign, what will you do?”

Sessions replied, “Senator Franken, I’m not aware of any of those activities. I have been called a surrogate at a time or two in that campaign and I didn’t have — did not have communications with the Russians, and I’m unable to comment on it.”

What does Sessions say now?

“I never met with any Russian officials to discuss issues of the campaign,” Sessions said in a statement after the Post story came out. “I have no idea what this allegation is about. It is false.”

Sessions further elaborated Thursday afternoon when he announced he would recuse himself. “Let me be clear. I never had meetings with Russian operatives or Russian intermediaries about the Trump campaign,” he said. “And the idea that I was part of a quote, ‘continuing exchange of information during the campaign between Trump surrogates and intermediaries for the Russian government’ is totally false. That is the question that Senator Franken asked me at the hearing. I did not respond referring to the two meetings… where no such things were discussed. My reply to the question of Senator Franken was honest and correct as I understood it at the time.”

How did everyone react?

Democrats and Republicans in Congress reacted swiftly. Many in both parties called on Sessions to recuse himself from any investigations into Russian interference in the election. Others, including the top Democrats in both the House and Senate, have called on him to resign. President Trump said he had “total” confidence in Sessions, who he said “probably” told the truth in his testimony.

The White House defended Sessions. Press Secretary Sean Spicer briefly addressed the controversy Thursday aboard Air Force One, telling reporters, “There’s no there there.” “He was clearly asked about his role as a campaign surrogate,” Spicer said, explaining Session’s answer in congressional testimony. “He was literally conducting himself as a U.S. senator. He didn’t do anything that wasn’t part of his job.”

Why does this all matter?

It matters because while Sessions was a member of the Senate’s Armed Services Committee, he was also one of President Trump’s top foreign policy advisors during his campaign. And Trump’s inner circle has for months been dogged by accusations of improper contact with Russia, at the same time that Russia has been accused of using cyber-attacks to meddle in the U.S. election.

During his campaign, Trump often praised Russian President Vladimir Putin’s leadership, and once the U.S. intelligence community concluded that Russia was behind hacks on the Democratic National Committee, Trump was reluctant to publicly accept the findings. Last August, Trump’s campaign chairman Paul Manafort resigned over questions about his links to Ukraine’s former pro-Russia regime. Then just last month, Trump’s national security adviser Michael Flynn was forced to resign after it came to light that he had misled Vice President Mike Pence about his contact with Russia during the transition.

In other words, this matters particularly because this is not the first instance of questionable contact between members of the Trump Administration and Russia.

Republicans were largely satisfied with Sessions’ decision to recuse himself, and Trump has stood by him. But some leading Democrats are continuing to call for his resignation.

– with reporting by Zeke J. Miller 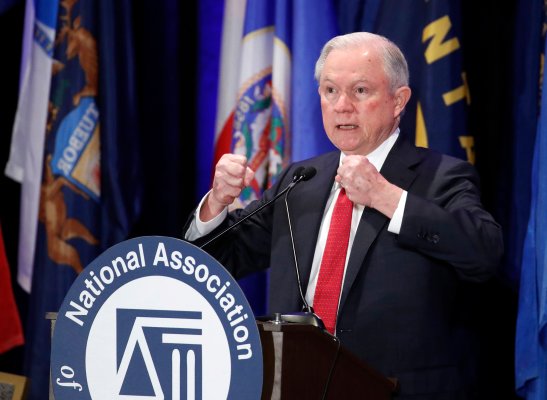 Attorney General Jeff Sessions Just Hinted at a Crackdown on Legal Marijuana
Next Up: Editor's Pick