Meet the Tea Partiers Behind the Rallies for President Trump Around the U.S.

Supporters of U.S. President Donald Trump hold signs during a rally in favor of the "America First" agenda on February 27, 2017 in Brea, California.
Justin Sullivan—Getty Images
By Josh Sanburn

The Tea Party was founded eight years ago to disrupt the Washington establishment, taking on entrenched Republicans and the Obama administration in equal measure. But now that President Trump is in office, some current and former Tea Party leaders are adopting a more inclusive tone for a very different mission: supporting the man in the White House.

On Saturday, more than 60 pro-Trump rallies organized by current and former Tea Party leaders will take place in cities across the U.S., with the aim of countering anti-Trump demonstrations and building a bigger, more welcoming tent of supporters. The “Spirit of America” rallies, set to take place in cities as big as Cleveland and St. Louis and as small as Gravette, Ark. (pop. 3,200), follow a dozen similar demonstrations earlier this week. And organizers hope that the tone and approach will mark a clear break from earlier Tea Party demonstrations.

“This is not a Tea Party rally,” says Debbie Dooley, an Atlanta activist and a co-founder of the first national Tea Party rally in 2009. “We’re not anti- this and anti- that. We’re very focused on not having negative signs, making sure they’re positive and upbeat.”

The demonstrations’ origins trace back to President Trump’s inauguration and the women’s march the day after. Dooley says she had to turn her phone off because she was getting a deluge of phone and email requests to do something, anything, in response to the scores of anti-Trump protests taking place around the country.

“I had women in particular email me asking, ‘Where’s the Tea Party?’” Dooley says. “I received so many I stopped answering the phone.”

During the Republican primary, Dooley had formed a pro-Trump group on Facebook called Main Street Patriots with Cleveland Tea Party organizer Ralph King. But the group really sprang into action after the inauguration, when Dooley and King saw it as a way to organize rallies for Trump. The first dozen were held Feb. 27 — the eight-year anniversary of the earliest nationwide Tea Party protests.

For Saturday’s rally in Cleveland, King, who broke with the Tea Party last year, says he’s working to line up several traditionally Democratic union members as speakers. “We are Donald Trump’s electorate,” King says. “Unions are not our enemy.”

Still, King says the pro-Trump rallies aren’t “competing with the Tea Party movement. We’re not here to compare ourselves with them.” He says that the rallies are designed in part to keep pressure on Republicans in Congress who oppose some of the president’s policies on issues like trade.

Dooley and King say the first protests were peaceful, but they’re concerned about the potential for counter-protests as they get more attention. They expect far more people to turnout Saturday. 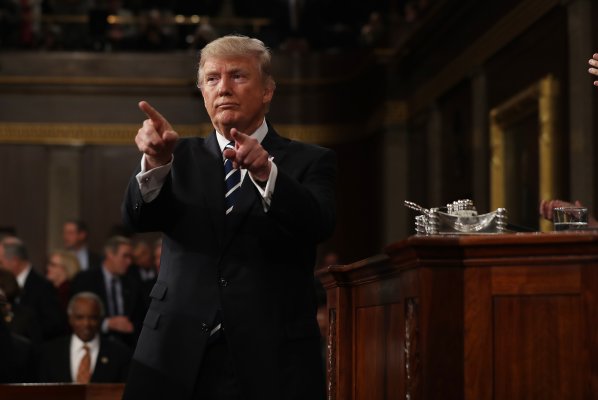 Donald Trump Finally Sounded Like a President
Next Up: Editor's Pick