2017 Might Not Be Europe's 'Year of the Populist' After All

Geert Wilders, leader of the Freedom Party, reacts during an interview in The Hague, Netherlands, on Thursday, June 16, 2016..
Jasper Juinen—Bloomberg via Getty Image
By Ian Bremmer

A wave of elections is crashing across Europe this year, in the Netherlands, France, Germany and possibly in Italy. But although German Chancellor Angela Merkel may face a tougher re-election fight than expected, the widely held fear that anti-E.U. populists will follow a trail blazed by Brexiters in the U.K. and Trumpists in the U.S. is exaggerated.

On March 15, Dutch voters will kick off this electoral season, and most recent surveys show Geert Wilders and his PVV party running first. Wilders, a longtime lightning rod for left-wing critics, has called Moroccan immigrants “scum” and promises a Brexit-style referendum for the Netherlands. Yet even if the PVV does come first, Wilders can’t make his anti-E.U. dream a reality. The PVV won’t poll much above 20%, and few of its rivals will be willing to join it in a coalition government. Moreover, “Nexit” would be a tough sell for a small country deeply dependent on E.U. trade and access to the single market. To leave the E.U. would require a two-thirds majority vote in both houses of the Dutch Parliament. That won’t happen.

In France, polls continue to show the National Front’s far-right firebrand Marine Le Pen running ahead in first-round voting on April 27, but centrist technocrat Emmanuel Macron is gaining ground. In a second-round runoff due on May 7, polls suggest he will defeat her handily. Nobody should rule out a surprise given the number of scandals this race has already produced, but Le Pen remains an underdog for now.

If Italy calls early elections this year, the populist, anti-E.U. Five Star Movement might yet finish first. But its hopes of building a parliamentary majority rest on the Euroskeptic Northern League and far-right Fratelli d’Italia sharply boosting their popularity too. Again, not likely.

Merkel does have a serious challenger in Germany’s September election, with recent polls showing Martin Schulz of the center-left SPD edging ahead. But Schulz is no Trump-style populist. He’s a former president of the European Parliament, a centrist on economic issues and a supporter of Merkel’s refugee policies. His success has been driven by calls for better pensions and reforms to unemployment benefits rather than populist slogans. He has promised to “make Europe great again” only to mock Donald Trump.

Which hammers home another, symbolic point: few Europeans actually like the U.S. President. Fewer than 1 in 4 voters in Germany, France and the Netherlands want closer E.U.-U.S. ties. Among the Dutch, Trump wins support from just half of voters on the far right. Perhaps Europe’s populists should be worried the tide is turning against them too. 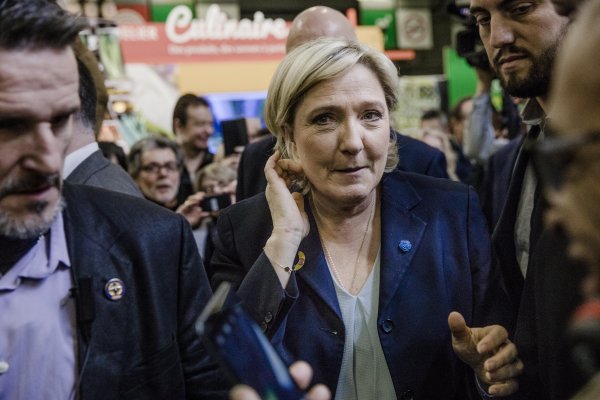 France's Le Pen Has Immunity Lifted Over ISIS Photos
Next Up: Editor's Pick