An Ancient Power Awakens, and Evolves, In New Zelda

Screenshot of The Legend of Zelda: Breath of the Wild
Nintendo
By Matt Peckham

Scrambling across the idyllic vistas of Nintendo’s vast new fantasy sandbox The Legend of Zelda: Breath of the Wild, it’s easy to see its half-sunken structures–artifacts of a vanished golden age waiting to be restored–as a metaphor for Nintendo itself. In the game, you play once more as Link, the franchise’s sandy-haired paragon, setting out to thwart nefarious forces, revitalize civilization and help Princess Zelda. In reality, this company so iconic its name still works as a metonymy for “video games” is reeling from rejection of its last console, the Wii U. Its new device, the Switch, represents Nintendo’s years-in-the-offing gambit to turn the train around and, hopefully, lay new track toward better terrain.

Breath of the Wild, a $59 action-adventure that launches with the Switch on March 3, has the makings of a masterful conductor. Exploring its painterly landscapes, expansive zones of verdant, gelid and sun-scorched areas is akin to tromping onto the set of a Studio Ghibli film. In scope and ambition, it’s like nothing else Nintendo’s ever made. The games industry can’t seem to stop releasing so-called open-world games (Grand Theft Auto V, The Elder Scrolls V: Skyrim, The Witcher 3) where players wander freely like this, and yet the new Zelda still feels like a mind-blowing mike drop.

It gets there in part by abandoning familiar safety nets. If Link gets too cold, he dies. If Link gets too hot, he dies. If Link swims or climbs without resting, he dies. And if Link wanders into an area with too-powerful monsters, since the entire world is basically accessible from the earliest moments, he dies. This brutalism makes for an edgy survivalist affair: when the temperature plummets, players must dress appropriately. When Link’s health drops, players have to forage for scraps, then find a campfire to cook. Even weapons are transient, shattering after a few vigorous skirmishes.

This turns Breath of the Wild into a playground on which players must choose when to wage tactically engrossing battles against multistory monsters, tinker with a Minecraft-like economy of raw materials or scale colossal rune-scrawled towers.

Of its locales the game says little, inviting players to wander like Hansel and Gretel off the trodden path into seductive peril. Almost anything visible is climbable–another first–but the steady drip-drip of a waning stamina meter and threat of going splat turn lofty ascents into tense pathfinding puzzles. The line between enemy and environment frequently dissolves in the coolest possible ways. A tree toppled by lobbing an explosive at a lumbering giant might, for example, wind up being used by said foe to bludgeon Link senseless.

But there’s a sense of Zelda-ish harmony in the game play that’s absent from other open-world games. Partly this is a result of what Nintendo has held over from various entries in the 31-year-old series: the clever, puzzle-filled dungeons; the Japanese Shinto-inspired mythology; the easy-to-grasp, hard-to-master tactics; the gaggle of adorable characters. That an experience this sublime and capacious happens to also be playable on planes, trains and, yes, the toilet is almost beside the point. 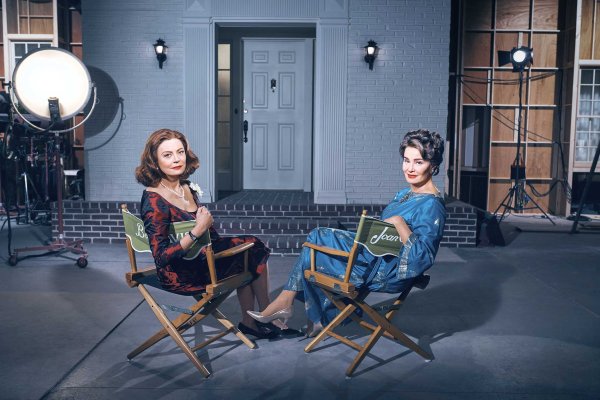 Review: Feud Is a Bonfire of Vain Biddies
Next Up: Editor's Pick