In the hours after the FBI launched an investigation into the vandalism of a Jewish cemetery in Philadelphia, where more than 100 headstones were found toppled on Feb. 26, photographer Charles Mostoller, made his way to Mount Carmel Jewish Cemetery. He was a couple of days late as press photographers had already come and gone. But, in this case, he had a unique advantage: a drone.

Using a DJI Mavic Pro drone, he flew over the highest concentration of knocked over headstones and turned the camera straight down to capture an image that would convey the full extant of the vandalism. “I took it up, but not too high and looked for the right arrangement,” he tells TIME. “The moment you got up into the air, you could see how few were still standing.”

The photograph is part of a larger project Mostoller has been working on that looks at how humans interact with and affect the natural world. “I am interested in using this vantage point to look at the world in a way we wouldn’t otherwise,” he says.

When flying his drone, Mostoller always makes sure he’s following the Federal Aviation Administration’s regulations. One of these rules restricts the use of drones within a five-mile radius of any airport. Luckily, Mount Carmel Jewish Cemetery happened to be a single block outside of the radius for the nearest airport.

Tools aside, Mostoller covered this story because he felt it was an important one to tell. “Right after this [act of vandalism], a couple of bomb threats were [made] to Jewish centers in the area,” he says. “For Jews in this community, it is very threatening and it is very reminiscent of what has happened to Jews in the past. Hatred boils up, it doesn’t just appear. This could be the vanguard of more overt and violent racism and anti-semitism in this country. Or it could be the end of it if we stand up and say we won’t stand for it in this country. I think we are at that moment right now.”

Charles Mostoller is a documentary photographer. See more of his drone photography on his Instagram. 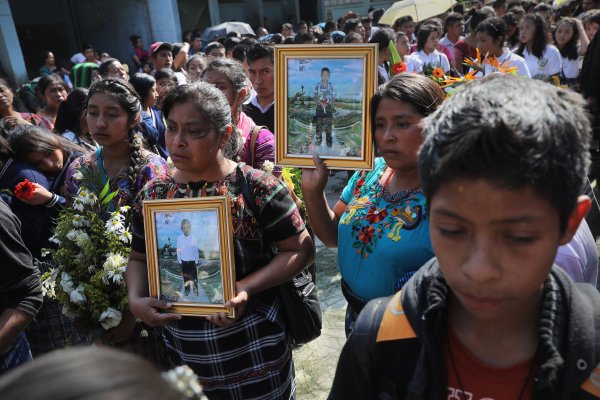 In Guatemala, Even Walking to School Can Turn Deadly
Next Up: Editor's Pick