Review: '1-2-Switch' Is the Real Reason to Buy the Nintendo Switch

“I wonder who they paid to do all these videos,” quips a guest at a Nintendo Switch party I’ve put together to test a kooky new game. She’s as amused and perplexed as the rest of us, watching rapturous adults in bibs, clown noses, bandannas, wizard hats and gorilla suits lurch around colorful IKEA-like sets. We’re playing 1-2-Switch, a $49 party game smackdown developed by Nintendo itself that arrives March 3 with the Switch, Nintendo’s new hybrid TV/handheld game platform (read our review of the hardware here).

The game—a motion control extravaganza in the mold of Wii Sports but way zanier—turns out to be weird in all the right ways. It’s an oddball gathering of 28 mini-games that needs two or more players to work. Make that two or more people standing in front of a television (or the Switch itself in tabletop mode), with the option to scale up to an unabashed gaggle of 20 corporeal souls. Gaming sessions can transpire anywhere the Switch goes, be that living rooms, tailgate parties, pubs or dorms. Call it gaming’s first massively multiplayer offline game.

“1-2-Switch is all about looking each other in the eye as you play!” reads a disclaimer each time the game loads, its repetition a signal that This Is Important. Ignore what’s happening on-screen, in other words — the theatrics are there only to show players how to approach each game (though once each match ensues, also to entertain onlookers like an irreverent jumbotron). It’s no gimmick or joke, however much each mini-game’s animated intro seems about to crack one. 1-2-Switch can in fact be a deeply serious experience of the sort first-timers may be tempted to see as glorified goofing off, until they realize what it’s really up to.

You play 1-2-Switch by hefting the Switch’s Joy-Cons, a pair of candy bar sized motion-sensing wands you can slide from the tablet’s sides, then wield like a pair of miniature Wii Remotes. Each player holds one (just two compete at a time), facing each other like a couple of Hogwarts students about to duel.

The twist is that the Joy-Cons also have “high-def” haptics, which is basically geek-speak for buzzing or rumbling. The high-def part means that instead of the soft or intense juddering common to gamepads for decades, each Joy-Con can vibrate with enough nuance, say, to let players imagine they’re tilting discrete, clacking marbles in a box, recklessly shaking a carbonated beverage or—I’m not sure this is safe for work—pulling down on the pliable udders of a lowing cow.

If you look at the screen, generally speaking, you will lose. It’s that simple, though it takes a bit to rewire neural pathways after decades of habituation. Screens in general are hard things not to gawp at, like luminous singularities for eyeballs. 1-2-Switch is in part an exercise in unlearning reflexive behaviors. It’s a video game, only without the “video.”

The games themselves make this an easy thing to want to do. They’re a melange of inventive high-jinks, tactile guessing and impish bluffs. In one, players twist the Joy-Cons like dials on a safe, probing for subtle shifts in the rumble feedback to isolate combination “click” points. In another, one player improvises dance poses, while the other has to “copy” them. In a third, players hold the Joy-Cons at their sides as if holstered, wrenching them up as a drawling, randomly timed Sam Elliott-ish voice shouts “Fire!”; a fourth, dubbed “Fake Draw,” is a hysterical perversion of the latter that has the game shouting sneaky, soundalike words like “Five!” or “Fine!”—twitch before you hear “Fire!” and you forfeit.

You can play the games individually, as randomly “shuffled,” or in a “Team Battle” mode, which jumbles the games into spaces across a boardgame-like path, then lets teams duel their way to the finish line. It is, in a word, ingenious, and though it took our party the better part of an hour to “get it,” once we acquiesced to the look-at-each-other thing, the recognition that these were in fact games not of whimsy but skill took hold.

What can locking eyes with friends, much less strangers, tell you about their next move? Not much, I’d wager. No one’s Vulcan eyebrow lifts or crinkling lids are going to betray likely whip-snap motions fast enough for anyone to act preemptively with any regularity. But then the whole “look each other in the eye” shtick is really just a purposeful distraction. It you’re looking at the screen, you’re distracted from what’s happening in your hands and eardrums. Looking at your opponent is, pun intended, a kind of bait and switch—a way to turn players’ focus to the Joy-Con’s haptic gradations or the game’s audio cues. It’s a brilliant idea when you realize what’s going on, one that works both as a tagline for the game and a play aid that’s rooted in the human hierarchy of sensory priorities.

What’s not to like about 1-2-Switch? Several of the mini-games require you add then remove the detachable Joy-Con wrist straps, but doing so can be quite the trick. The Joy-Cons slide all but effortlessly into or out of the Switch tablet itself, but the wrist straps are fussier. They’re not quite pop-the-cork-out tight, but you can’t tease them out gently. You’re doing something wrong if you’re injuring yourself here, but the release mechanism on the Joy-Con straps (a tiny lock on each must be disengaged before sliding them on or off) could definitely stand improvement.

I’m also disappointed Nintendo couldn’t figure out how to make the game a Switch pack-in, as Wii Sports to the Wii. The Wii caught and kept fire arguably off the buzz around that game alone. Making 1-2-Switch an optional buy also makes it a potential no-buy, which, if the core-gamer group eyeing Switch for the new Zelda opt to skip it, means the elusive demographic I think Nintendo’s really after here won’t be virally exposed to it.

That would be a shame, because 1-2-Switch, not Zelda, turns out to be the best reason to consider picking up Nintendo’s new console. Yes, The Legend of Zelda: Breath of the Wild may go down as the finest game Nintendo’s yet made. But you can play Zelda on Wii U. 1-2-Switch only works on the Switch. It is an absolute blast, a party game nonpareil, but also a showcase for the sort of “next-gen local play” possibilities the Switch may turn out to be persuasive enough to give literal legs to. 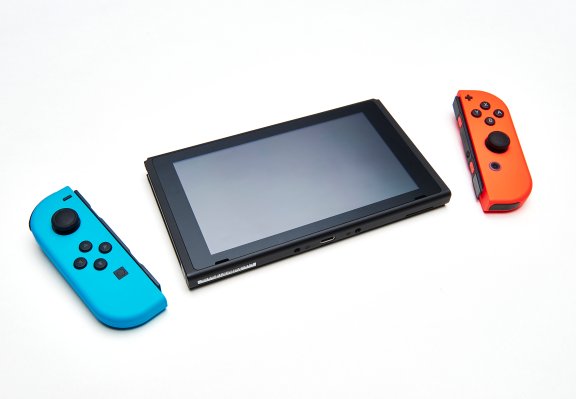 Review: The Switch Is the Nintendo System We've Been Waiting For
Next Up: Editor's Pick