It’s perhaps the single most significant date in Taiwan’s history, and it is one that is typically observed with anguish. So it should come as no surprise that an attempt by a fast-food chain to turn Feb. 28 into a pizza party was not well received.

Late last week, the Facebook page of Pizza Hut Taiwan shared a link to a promotion throughout the five-day weekend marking the 70th anniversary of what’s known as the “228 Incident.” The promotion, according to local news outlets, originally asked customers if they were “ready to celebrate” with “killer” combo deals.

The 228 Incident is remembered as the starting date of a mass slaughter of civilians that cemented the rule of an authoritarian regime on the island province off the coast of China.

Seventy years ago, civil unrest spilled into the streets of Taiwan amid frustration with the ruling Kuomintang nationalist party, which had assumed control of the territory after fleeing a civil war loss to the communists in China. The days and weeks after the outbreak of open rebellion were met with massacre; historians say tens of thousands civilians may have been killed in the crackdown that ushered in an era of oppression now known as the White Terror.

“I used to go to Pizza Hut with friends often, but what you did today is really awful,” Facebook user Yiting Wang commented beneath Pizza Hut’s Facebook post, which has been shared more than 1,500 times and provoked hundreds of angry responses. Another user, Renjie Zheng, was similarly enraged, posting, “I dare you, Pizza Hut, to celebrate 9-11 in the U.S., or to celebrate the slaughter of Jewish people in Germany. I dare you.”

Another social media user noted that, “many victims’ families are still alive, what did they do to deserve treatment like this?”

Pizza Hut Taiwan changed the language of the post after the public outcry, along with a message to customers that the company was “deeply sorry for our recent improperly-worded Facebook promotional message which has offended some customers.” A spokesperson for Pizza Hut Taiwan, Howard Li, tells TIME that its only intention was to offer an “attractive value” during the long weekend, and that the company “deeply values customers’ feedback and respects consumers’ feelings and sentiments.”

For decades, the incident was hardly talked about in Taiwan. It was both galvanizing and polarizing; the brutality of the event secured the absolute authority of the Kuomintang, while uniting some civilians against their militancy and ultimately giving rise to ambitions of an independent Taiwan.

Taiwanese President Tsai Ing-wen joined modest crowds of observers to commemorate the event known by some as the birthday of modern Taiwan. On Tuesday she made an unusually forward appeal for an inquiry into the events, for which no one has ever been held to account, posting on Twitter: “We must pursue #TransitionalJustice so that society can reconcile & move forward. Together.” 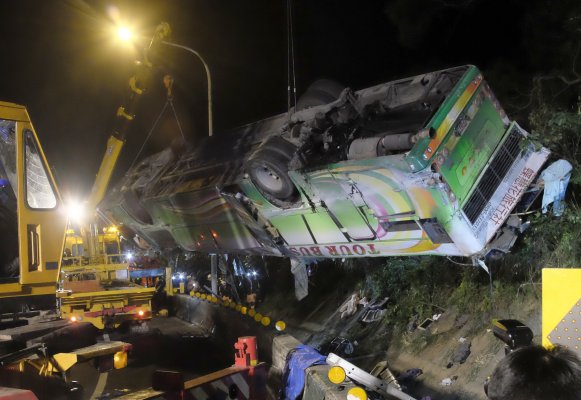 Speed May Have Been A Factor in Taiwan Bus Crash That Killed 33
Next Up: Editor's Pick