The Oscars’ envelope fiasco gave us some top-notch celebrity facial expressions. There was Ryan Gosling’s disbelieving smile. There was the stunned look on Trevante Rhodes’ face as he walked to the stage. And there was that insane close-up of Meryl Streep, who reminded us all why she’s the most nominated actor in Oscar history by delivering a full range of shocked expressions.

But without a doubt, one of best photos of the night came from Los Angeles Times photographer Al Seib, who snapped a picture of the crowd’s reaction. The photo shows stars like Matt Damon and David Oyelowo watching the stage in stunned disbelief, but social media zeroed in on Dwayne Johnson’s expression. Now, The Rock himself is opening up about what was going through his head.

“You can literally see my wheels spinnin’ on whether or not I should hit the stage and take down an Oscars producer who I thought went rogue and was trying to sabotage our final moment of the night as La La Land was accepting for Best Picture,” Johnson wrote on Instagram. “Seconds before this I saw out of the corner of my eye, the producer saying loudly, ‘NO IT’S MOONLIGHT, the winner is MOONLIGHT!’ as he walked up onto the stage.”

Johnson took the stage earlier in the night to introduce Lin-Manuel Miranda and Auli’i Cravalho’s performance of “How Far I’ll Go” from Moana, and he joked on Instagram that he was seriously considering going back onstage to help sort out the best picture snafu.

“I give La La Land producer Jordan Horowitz much respect for stepping up to the mic and calling the Moonlight filmmakers and actors to the stage to accept their award,” he added. “Thankfully, Jordan gave us the clarity we needed, because as much as I love and adore Meryl, I was willing to rumble over her to take down the producer going rogue.”

Maybe next year, the Academy should hire Johnson to oversee the envelopes and make sure everything goes smoothly. 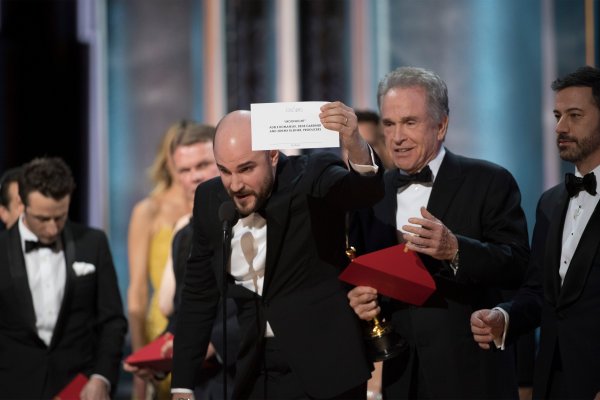