Subway is under fire after a Canadian television show reported that the restaurant’s chicken products could be made up of less than 50% actual chicken. According to tests performed at Trent University in Canada, the company’s chicken strips and oven-roasted chicken contained just 43% and 54% chicken DNA, respectively, consisting otherwise of soy and other filler ingredients.

The sandwich chain denies the allegations.

The investigation, which aired in February on the CBC program Marketplace, included DNA tests of chicken products purchased from several fast-food chains in Canada. Researcher Matt Harnden said on the show that his lab, which tests meat samples for both industry and government, could provide a “rough estimate” for the ratio of chicken DNA to other ingredients. (The episode can be viewed here on YouTube.)

Most chicken samples tested—from McDonald’s, Wendy, Tim Hortons and A&W—contained between 85% and 90% chicken DNA. Fast-food chicken wouldn’t be expected to be 100% bird, Harnden said, because of seasoning marinades, and other ingredients that are likely added in the preparation process.

But the chicken content of the samples from Subway was consistently low even after repeated testing, and the tests showed that much of the remaining DNA was from soy protein. “Assuming the data is right, that is a surprisingly large amount of soy,” says John Coupland, president of the Institute of Food Technologists and a professor of food science at Penn State University, who was not involved in the testing.

Elevated soy levels might be expected in reconstituted meat products, in which meat is ground up and stuck back together with binder ingredients, says Coupland. “But even then, 50% is high,” he says. “And it’s astonishingly high for something that you’re supposed to think is a real, whole piece of chicken.”

In a statement sent to TIME on March 5, a representative for the company said, “Test results from laboratories in Canada and the U.S. clearly show that the Canadian chicken products tested had only trace amounts of soy, contradicting the accusations made during the broadcast of CBC Marketplace.'”

In an earlier statement provided to TIME, a Subway representative said, “Our chicken is 100% white meat with seasonings, marinated and delivered to our stores as a finished, cooked product. We have advised [Marketplace] of our strong objections… [and] we are insisting on a full retraction.”

Coupland says that a high soy content that turned up in the Marketwatch study may be concerning to some with allergies. Most people with an allergy know to avoid fast food, since traces of soy are found in so many processed foods, he says. “But if people think they’re getting pure chicken and they’re in fact getting a mouthful of soy, that’s potentially dangerous.”

Nutrition tests performed for Marketplace also found that fast-food chicken contained 25% less protein than home-cooked samples, and between 7 to 10 times the amount of sodium.

Subway’s chicken strips and oven-roasted chicken are both available at United States locations, but, according to the company’s website, their ingredients vary slightly from their Canadian counterparts. Both countries include soy protein in their chicken strips, but only the U.S. version specifies that it’s present in quantities of 2% or less. And while Canada does include soy as an ingredient in its chicken patty used for the oven-roasted chicken sub, the United States does not.

A panel of taste testers on Marketplace rated Subway’s chicken as their least favorite among the fast food options, noting that the samples tasted “saltier” and “more artificial” than those from other chains. One panelist commented that Subway’s chicken strips tasted like “more flavor than actual chicken.”

The fast-food chain, which prides itself on offering healthy alternatives to burgers and fries, was hit with a rash of bad publicity in 2014 when customers complained that azodicarbonamide, a food-grade material also found in yoga mats, was used in their bread. Subway removed the chemical, and pledged the next year to remove all artificial ingredients from its food in North America by 2017. 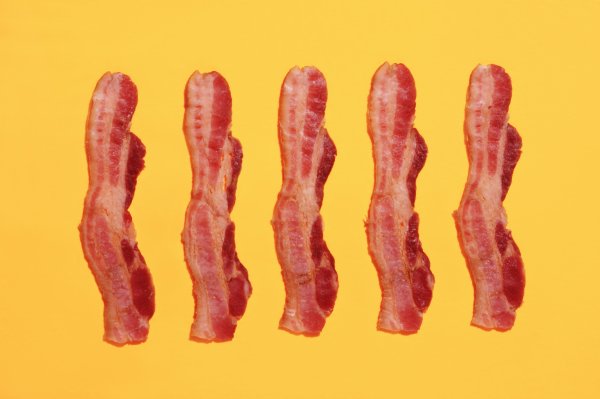 How to Make Eggplant Bacon
Next Up: Editor's Pick