President Obama Put an All-Gender Bathroom in the White House. Trump Kept It

The Trump Administration is maintaining a gender-neutral restroom at the White House, despite recently rolling back a key Obama-era policy designed to protect transgender youth.

The White House’s “All-Gender Restroom” was established during the Obama Administration in 2015 in Room 180 of the Eisenhower Executive Office Building, just steps from the West Wing. A White House official confirmed late Monday that the single-user restroom remains in place for White House staff and visitors.

“The President believes it’s a states’ rights issue,” White House Press Secretary Sean Spicer said last week of bathroom access for transgender people, adding that Trump believes that individual states and districts should set their own policies. As for the President’s own policy, as a candidate, Trump told NBC’s Today Show last year that Caitlyn Jenner could use any bathroom in Trump Tower of her choosing. “That’s consistent with everything he’s said,” Spicer said on Feb. 23.

While leaving a bathroom in place might seem like a tiny gesture, it has added symbolic weight after Trump’s Administration chose to backtrack on other moves Obama made in support of transgender rights before he left office. First, Trump’s Justice Department dropped a challenge in a lawsuit over the key policy guidance that the Obama Administration had issued, instructing federally funded schools to respect transgender students’ gender identities — or run the risk of violating Title IX, which prohibits sex discrimination in education.

Then, in a joint action, the departments of Justice and Education rescinded the guidance itself on Feb. 22, a move that parents of transgender children and LGBT rights advocates decried as “obscene” and “spiteful” and characterized as bullying transgender kids.

Advocates also interpreted the policy rollback as a signal that the Trump Administration will not defend the rights of transgender people, as the Obama Administration actively did toward the end of his time in office. Mara Keisling, executive director of the National Center for Transgender Equality, said at the time that the action “flies in the face” of repeated comments Trump has made saying he supports LGBTQ people. And many are still uncertain about where the President stands and what he might do to expand or contract LGBT rights in the future.

“We’re in this place where the government is saying one thing and doing another thing and it leaves us just not knowing,” says Greta Martela, a transgender woman and founder of Trans Lifeline, a crisis line for transgender people. So even something as small as a sign that says “all gender” in the White House can become a piece of evidence on which to base speculation.

One Administration official cast the decision to maintain the restroom as an example of how individuals, including the President, can act respectfully to be inclusive of all without government mandates.

Obama originally installed it at a time when cities across the country — and even the state of California — have been mandating that all single-user restrooms be marked as gender-neutral. While many supporters of those policies say there are practical reasons to change the signage that affect everyone (like shortening lines for women and making sure people with opposite-sex caretakers feel comfortable), the primary intention is typically to minimize risks and discomfort for transgender or gender nonconforming people.

The original designation also came at a time when Obama had issued an executive order banning workplace discrimination against LGBT federal contractors. A draft order to roll back the Obama regulation circulated among media and advocacy groups earlier this month, but was blocked, in part because of opposition from Trump’s daughter and son-in-law.

“President Donald J. Trump is determined to protect the rights of all Americans, including the LGBTQ community,” the White House said in a statement, after it was clear the draft was scuttled. “President Trump continues to be respectful and supportive of LGBTQ rights, just as he was throughout the election.” 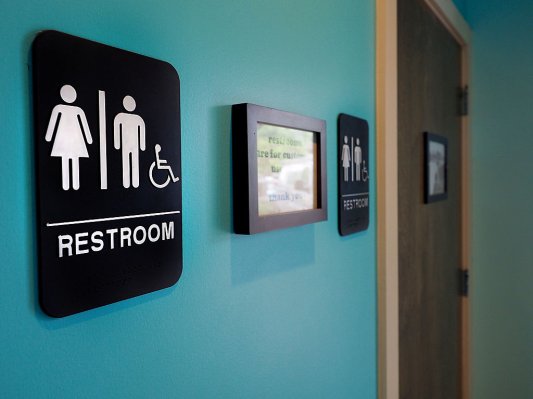 What the Bathroom Memo Means for Transgender Kids
Next Up: Editor's Pick