Many Congressional Democrats opted to sit out the inauguration of President Donald Trump as a form of protest, but on Tuesday when Trump delivers his first address to a joint session of Congress, Democrats will express their discontent with the President in a different way: by inviting immigrants, Muslims and refugees affected by the president’s early policies.

At least 21 Democrats will have guests who have been either impacted by the president’s executive order banning travel from seven majority-Muslim countries and pausing refugee resettlement or his aggressive new immigration enforcement orders.

The American Civil Liberties Union, whose clients will be joining Reps. Judy Chu of California and Nydia Velázquez of New York, says the Democrats will “demonstrate the importance of inclusion and equality alongside community members who represent diversity in America.” Iranian graduate student Sara Yarjani will join Chu at Tuesday’s address. The ACLU says was detained at the Los Angeles airport for 23 hours as a result of the president’s ban, despite having a valid two year-student visa. Velázquez‘s guest is Hameed Darweesh, an Iraqi former interpreter for the U.S. military who was detained at New York’s John F. Kennedy International Airport for 18 hours.

“These guests, who will sit in the House gallery during Tuesday’s address, have overcome discrimination and made positive contributions to society, exemplifying the ideals of our great nation,” a statement from the ACLU reads.

Democratic Sen. Mark Warner of Virginia is bringing Rev. Keary Kincannon, a pastor from a Northern Virginia church where a group of Latino men were detained by ICE agents after utilizing its a hypothermia shelter. Democratic Sen. Elizabeth Warren is bringing Tiba Faraj, an Iraqi refugee who came to the U.S. in 2010. Warren said Faraj represents the “very best of the American spirit.” Democratic Sen. Catherine Cortez Masto of Nevada is hosting immigration reform activist and DREAMer Astrid Silva. Silva has also been tapped to deliver the Spanish-language response to the president’s address on Tuesday.

“At a time when immigrant are constantly under attack, Astrid serves as a reminder that we are a country that fights for those who need protection, and one that gives opportunities for all to live up to their full potential regardless of where you come from,” Cortez Masto said in a statement.

Other members of Congress are bringing Muslims who have faced discrimination and attacks over the past year and a half, including Rep. Pramila Jayapal of Washington, whose guest Aneelah Afzali saw her mosque defaced after the 2016 election. The biggest troll of the night will surely go to Rep. Filemon Vela of Texas, who has invited celebrity chef José Andrés to join him in the chamber. Andrés was infamously sued by Trump after backing out of a deal to open a restaurant at the president’s new D.C. hotel.

“The lives these guests lead stand in stark contrast to Trump’s relentless campaign of xenophobia and scapegoating. They came to America, and stay in America, because it is a land of opportunity,” said Frank Sharry, the executive director of the America’s Voice Education Fund, a immigration advocacy group.

The Democrats guests stand in stark contrast to the announced guests of President Trump and First Lady Melania Trump. Three of the people joining the Trump’s on Tuesday have family members who were killed by illegal immigrants. 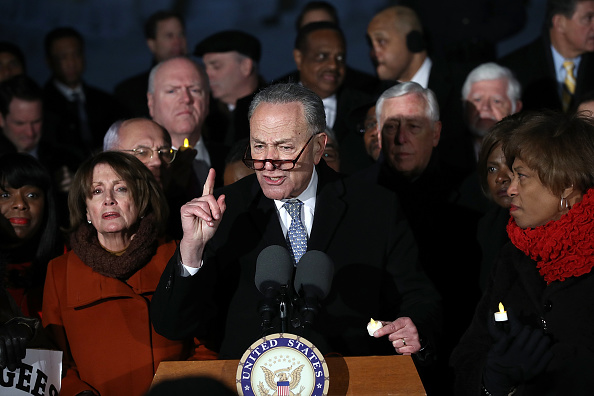