Secretary of Education Betsy DeVos was criticized Tuesday for praising the nation’s historically black colleges and universities, as “pioneers” of the school choice movement.

“HBCUs are real pioneers when it comes to school choice,” DeVos said in a statement after a White House listening session with HBCU presidents. “They are living proof that when more options are provided to students, they are afforded greater access and greater quality. Their success has shown that more options help students flourish.”

The overwhelming majority of the schools were founded after the Civil War and provided educational opportunities to blacks during the Jim Crow Era when African Americans were shut out of institutions that catered to whites.

Critics noted that the schools were necessary because of the Plessy v. Ferguson decision that allowed racial segregation, which forced black students into separate schools.

Democratic Sen. Claire McCaskill of Missouri called the statement “totally nuts” in a tweet. “Totally nuts. DeVos pretending that establishment of historically black colleges was about choice not racism,” she wrote.

Democratic Sen. Bob Casey of Pennslyvania, who serves as the ranking member of the committee on Health, Education, Labor and Pensions, also denounced the statement on Twitter. “No, Sec. DeVos- the segregation and inequality that forced the establishment of HBCUs is not a model of ‘school choice,'” he wrote.

President Trump is expected to sign an executive order on Tuesday that announces the restructuring of an existing initiative to address the needs of black colleges. 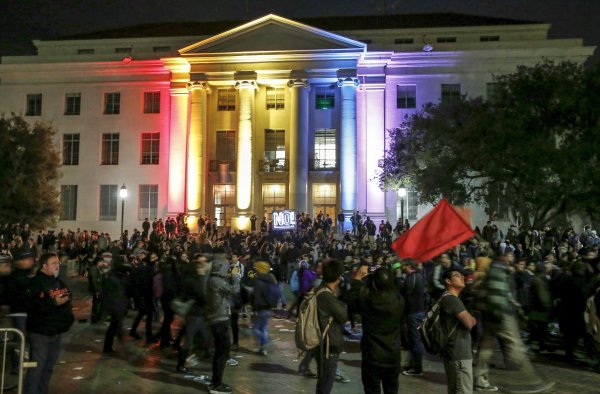 Trump's Threat Would Cut Over Half of Berkeley's Research Funding
Next Up: Editor's Pick