Elon Musk has been known to keep only few books on the shelf behind his desk at the SpaceX factory floor in Hawthorne, Calif. Most of them are basic books on rocket design. The remaining one is Einstein, the biography of the great physicist, by former TIME editor Walter Isaacson. There’s an odd push-pull in a man like Musk, who is humble enough to own a space launch company and yet still keep his how-to-build-a-rocket-ship books on display, and ambitious enough to make it clear who his role model appears to be.

It was that ambitious dimension of Musk that was on fullest display this week when he announced that late next year, SpaceX will send two astronauts around the moon, venturing further into space than human beings ever have.

“Like the Apollo astronauts before them, these individuals will travel into space carrying the hopes and dreams of all humankind,” a statement on the SpaceX site said. Invoking Apollo had more resonance than it seems. If the mission flies when promised, it will occur close to the 50th anniversary of the Apollo 8 lunar orbital mission, which was a similar swing for the fences that NASA launched in Christmas week 1968. Musk knows rockets, but he also knows marketing, and this is not likely to have escaped his notice.

The question, of course, is whether he can really make good on his promise. And the answer is uncertain.

Let’s stipulate that SpaceX is in many ways the wünderkind company people believe. It was the first non-governmental body to send a spacecraft to orbit and recover it intact. It has made multiple successful cargo runs to the International Space Station, and has pulled off the dazzling feat of landing the spent first stage of its Falcon rockets upright, on four legs, on a floating barge in the Atlantic, rather than simply letting it tumble back into the ocean as generations of expendable rockets have done. The company is also scheduled to begin carrying astronauts to the International Space Station in 2018—though that schedule has slipped from 2017 and could slip some more.

But the moon is another matter. In some ways Musk has kept things easy. His company has already selected the crew — two so-far unnamed passengers who are being described as paying tourists, not astronauts, though they will still undergo what Musk describes as “extensive training.” That training, however, will be mostly be about how to manage emergencies and survive the physical rigors of flight; the spacecraft will be doing all of the flying automatically.

The mission will also be the simplest moon journey possible — a so-called circumlunar trajectory, in which the ship simply swings around the far side of the moon and allows lunar gravity to fling it home, rather than settling into orbit. Orbiting the moon is not only more difficult but vastly more dangerous. If your braking engine burns too long as you slow down to settle into orbit, you’ll crash into the surface of the moon instead. If the engine fails to fire when it’s time to speed up and head home, you’ll become a permanent satellite of the moon, forever imprisoned in orbit. It was that dark scenario that had a lot of planners inside NASA arguing for a circumlunar trajectory for Apollo 8, but the orbital advocates won the day and the crew eventually made 10 circuits of the moon before coming home.

Musk’s boast that the crew will travel farther from home than humans ever have is legitimate, but is actually less than it seems. The current distance record is held by the crew of Apollo 13, who similarly made a single swing around the moon in their crippled spacecraft, arcing out to 248,655 mi (400,171 km) before returning. Musk plans to go 300,000 mi. (483,000 km) or more, but a wide turn in space is a little like a wide turn in a car: It’s actually easier than a tight turn.

The two biggest challenges Musk faces are the business of getting off the ground and getting back to Earth. The first part requires him to have the right rocket for the trip, which he doesn’t yet. SpaceX’s space station runs have been made with the company’s workhorse Falcon 9 rocket which, as its name suggests, has a cluster of nine first stage engines. Part of the company’s business plan has always been affordability and scalability, which means not spending R&D dollars building bigger engines for longer missions. Rather, just bundle the ones you’ve got.

For a deep space mission to the moon or Mars, the company plans to use its still-in-development Falcon Heavy — set for its first unmanned test flight this summer — which uses three nine-engine clusters at its base. Twenty-seven engines lighting and firing at once means a lot more moving parts and a lot more vibrations than a rocket with fewer engines has. Those vibrations that can be killers, since if they vibrate at the right — or, really, wrong — resonance, they can shake the entire machine to pieces.

Finally there’s the business of reentry. Reentering the atmosphere from Earth orbit is — relatively speaking — an easy thing to do, a matter simply of using your engine to pump the brakes, slow down and then fall out of the sky. A spacecraft returning from the moon is traveling 40% faster than an orbiting spacecraft, effectively slamming into the atmosphere. Surviving that impact requires hitting a narrow “entry corridor” just 2.1 degrees wide — lest you enter two steeply and burn up or too shallowly and skip off the atmosphere and bounce off into space forever. Even if you do hit that bullseye, you don’t then simply ride the reentry fire down to landing as an orbiting spacecraft does. Partway down you actually have to climb back up to bleed off some speed and g forces, before heading back down again.

That so-called “skip entry” was in some cases the most hair-raising part of the Apollo 8 mission, since no crew had ever attempted it before. Even though it was successful, it wasn’t much fun for the crew, who pulled a load of nearly 7 g’s — or seven times earthly gravity. A lot has changed in the 50 years since that mission flew, but basic physics haven’t, which means that SpaceX’s paying tourists will experience that same crushing force.

None of this means that Musk can’t make good on his moon boast. The Saturn V had only had two unmanned launches — and only one of them was successful — before it carried astronauts. The skip entry had never been tried before at all, but Apollo crews eventually flew it nine times — giving SpaceX engineers more confidence that they can do it too.

Most important, Apollo 8 and all the Apollos that followed were exercises in audacity — in the best, most bracing way possible. That is another legacy on which SpaceX proposes to build, and for that the company deserves applause. 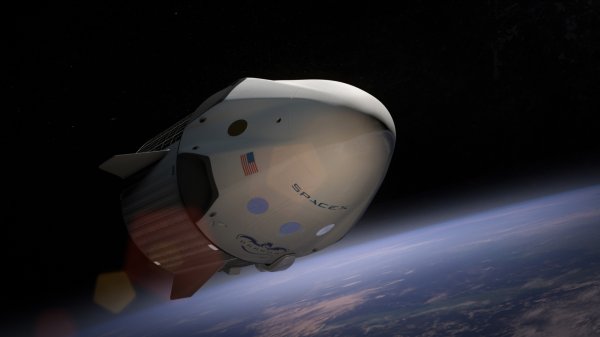 SpaceX to Send 2 Passengers Around the Moon
Next Up: Editor's Pick