A man and woman in Douglas County, in Georgia, have each been given double-digit sentences for their part in crashing an African-American child’s birthday party, in what the judge said was a hate crime.

Jose Ismael Torres, 26, and Kayla Rae Norton, 25 — reportedly parents of three children — were found guilty earlier this month of violating the state’s street-gang terrorism law. The pair had joined a group called Respect the Flag that drunkenly drove around Georgia’s Douglas and Paulding counties over two days in July 2015. They waved Confederate flags from pickup trucks, made armed threats against black motorists, and hurled racial epithets at attendees to the 8-year-old’s birthday party, the Atlanta Journal-Constitution reports.

On Monday, Superior Court Judge William McClain, who described the pair’s actions as being “motivated by racial hatred,” sentenced Torres to 20 years, with 13 to serve in prison, and Norton to 15, with six to serve. He noted that the pair would both have been aware of white supremacist Dylann Roof’s attack on a predominantly black Charleston church that left nine dead less than a month before.

Addressing several of the victims who had come to court to witness the sentencing, Norton expressed remorse, saying: “I do accept responsibility for what I’ve done. What happened to you is absolutely awful.”

Two others had earlier pleaded guilty to similar charges and received lesser sentences. 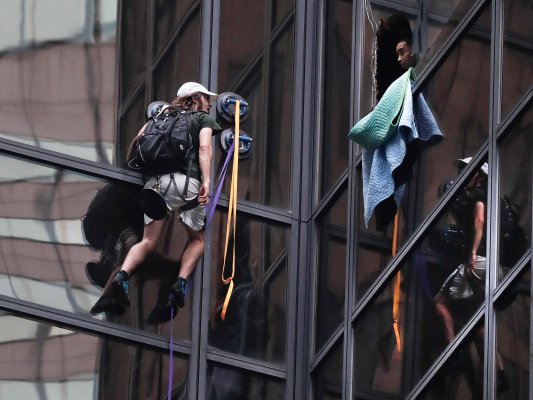 Trump Tower Climber Gets No Jail Time
Next Up: Editor's Pick