When President Trump addresses Congress on Tuesday, he may make use of some of the State of the Union’s best-known tropes or name-drop his guests the way Presidents have done at decades’ worth of such speeches.

But here’s your reminder that the speech he’ll give is not actually a State of the Union address — even though it could have been. The reason it’s not goes back to a tradition that was started by Ronald Reagan.

The origins of the President’s regularly scheduled speech to Congress can be traced to the Constitution, which requires that the President “shall from time to time give to the Congress information of the state of the union, and recommend to their consideration such measures as he shall judge necessary and expedient.”

This rather vague construction has meant that Presidents have differed over the years on how they preferred to fulfill that duty (with a written message or in person, for example) and what such information would look like, but it’s generally been the case going back to George Washington’s time that the “information on the state of the union” is given by someone who’s in a position to know what that state is. In other words, the people who give such speeches are usually people who have been President for a while.

At first, however, that was just a coincidence. The Presidential duty would generally be fulfilled shortly before the New Year, which meant that even a fresh office-holder would have been in charge for the good portion of a year. (A full list of such addresses and the dates on which they were given can be found at the American Presidency Project of the University of California, Santa Barbara.)

As they did in so many areas, things changed under Franklin Roosevelt.

He was inaugurated in March of 1933, but he did not deliver a State of the Union that year. Instead, he did so in early 1934. In between, the 20th Amendment had gone into effect, changing when the new session of Congress would begin and moving inaugurations to January. FDR decided to address Congress in January, at the beginning of the term, rather than in December. That meant that if future presidents followed his lead, the State of the Union — which was still formally known as the Annual Message, though informal usage of the term “State of the Union address” had begun to spread — would run right up against Inauguration Day.

This change didn’t make a difference for another two decades or so — FDR kept getting reelected, and the transition to Harry Truman after FDR’s death continued to mean that the person in office in any given January had been there for a while. It was during this period, in the 1940s, that the Annual Message became more officially known as the State of the Union, per the House of Representatives. (One reason the name change stuck, according to Senate historian Donald Ritchie, was Frank Capra’s 1948 film State of the Union, which TIME called “mildly entertaining.”)

In January of 1953, weeks before turning over power to Dwight D. Eisenhower, Truman delivered his final State of the Union. But then Eisenhower made an interesting decision. Rather than wait until the following January to meet his duty to recommend measures to Congress, he went before the Congress to make a speech in February, even though he had only been President for a few weeks.

Eisenhower wrote in his diary that he had misgivings about speaking so soon:

But, as NPR has noted, an incoming President who has something to say — for example, a statement about a party transition, which Eisenhower represented and which helped him decide to speak despite his worries — might have reason to want to speak about the State of the Union even a few weeks in. Following Eisenhower, that idea of delivering a State of the Union right after being inaugurated was followed by John F. Kennedy in 1961 but did not become a real tradition.

Then, when Ronald Reagan came to office in 1981, he took a slightly different tack: though he did deliver an address to the Joint Session of Congress in February of 1981, just after his Inauguration Address, he specifically did not call it a State of the Union. Jimmy Carter had delivered one right before leaving office, and Reagan instead called his speech an “Address Before a Joint Session of the Congress on the Program for Economic Recovery.” Though TIME noted that the speech was “what amounts to a State of the Union address,” it wasn’t one. George H.W. Bush followed that pattern in 1989, Bill Clinton in 1993, George W. Bush in 2001 and Barack Obama with his 2009 speech. (Meanwhile, the tradition of an outgoing President delivering a last State of the Union prior to his departure has faded.)

Trump’s this year is billed as following Reagan’s script rather than Eisenhower’s: it’s an address to Congress, but not a State of the Union.

For all that history, however, the name of the speech may not matter all that much. As the Congressional Research Service points out in its analysis of the State of the Union, “scholars consider these speeches to serve the same ceremonial, rhetorical, and political function as a typical State of the Union.” 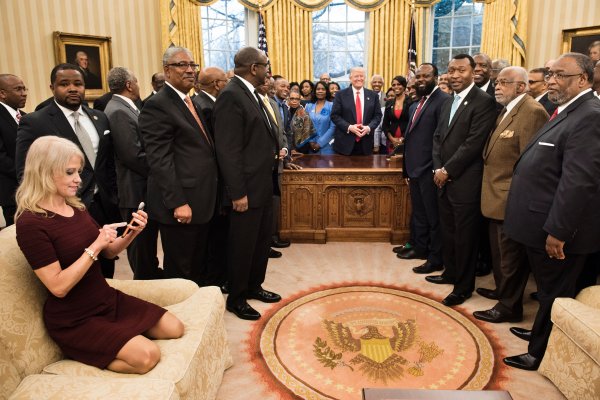 Kellyanne Conway Goes Viral for Kneeling in the Oval Office
Next Up: Editor's Pick