President Trump told a meeting of governors that reforming health care is “unbelievably complex,” but pledged that a Republican alternative would be “very good.”

Speaking to a bipartisan group in town for the National Governors Association meeting, Trump said that Republicans have to tackle health care reform before they can get to other subjects like tax reform because of the way the budget process works.

Trump said that while tax cuts would be “major and simple,” health care reform was turning out to be difficult.

“I have to tell you, it’s an unbelievably complex subject,” he said. “Nobody knew that health care could be so complicated.”

The Affordable Care Act was passed in March of 2010 after more than a year of debate involving Congress and the White House. Health care accounts for more than one-sixth of the U.S. economy.

Trump also argued that recent polls which showed the law has become more popular were just a side effect of the American public realizing that the law would be ending soon. A recent survey from the Kaiser Family Foundation found that 48% of Americans have a favorable view of the Affordable Care Act, the most popular it’s been in 60 surveys the nonprofit has taken since 2010. Other polls show similar results.

“People hate it, but now they see that the end is coming and they’re saying, ‘Oh, maybe we love it,'” he said. “There’s nothing to love. It’s a disaster folks, OK? So you have to remember that.” 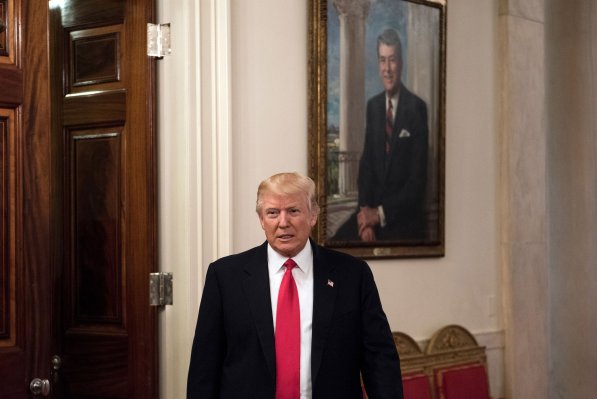 Watch a Group of Witches Cast a Spell at Trump Tower
Next Up: Editor's Pick