If anyone understands how Warren Beatty is feeling today, it would be Steve Harvey. The comedian and show host famously anointed the wrong Miss Universe during the pageant’s final moments in 2015, handing the crown off to Miss Colombia instead of Miss Philippines, to general uproar.

Similarly, at Sunday night’s memorable Oscars, veteran actors Warren Beatty (aided by his Bonnie and Clyde co-star Faye Dunaway) ended up announcing the wrong winner for the award for Best Picture. The producers behind the show, it should be noted, the accounting firm PriceWaterhouseCooper for the mixup; Beatty was evidently handed the wrong envelope on his way to broadcasting the big winner, resulting in the uncomfortable situation. In the middle of the confusion, Oscars host Jimmy Kimmel even quipped about Harvey. “Personally, I blame Steve Harvey for this,” he joked while the La La Land group moved aside to give Moonlight the spotlight.

But Beatty, who seemed early on reluctant to read the printed winner and who apologized onstage after the mistake became apparent, is not alone. Harvey, at least, knows how it goes.

The Miss Universe Twitter account also reached out to Beatty, ostensibly knowing how to help clean up the fallout. 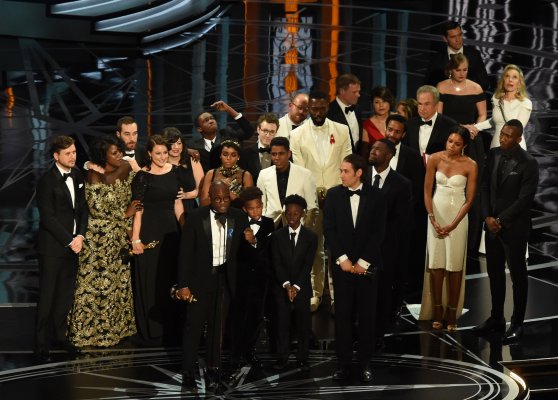 21 Celebrities Who Were More Excited Than You About Moonlight's Best Picture Win
Next Up: Editor's Pick