The 2017 Oscars took a turn when everyone learned that Moonlight actually won Best Picture, not La La Land as originally announced.

The cinematic twist during the ceremony’s final moment stunned millions, but most importantly, the famous people had feelings. So at the precise moment when all eyes were on the stage for the awkward transition, the LA Times captured a who’s who of reactions. There’s something for everyone in this historic photograph because the expressions ran the gamut from bewildered to wincing and far beyond.

Ever the expressive dramatist, David Oyelowo looked like he might have been in disbelief. The Rock looked as if the apocalypse happened. Matt Damon’s eyebrows wordlessly communicated everything you can’t. His pal, Ben Affleck looked to his right, not knowing what to do while Salma Hayek appeared to cringe and freeze. Oscars veteran Meryl Streep prepared to go in full crisis mode.

But there’s no debating that Busy Phillips and Michelle Williams had the best looks on their faces. Mouths agape, the standard awards show companions were very much stunned. 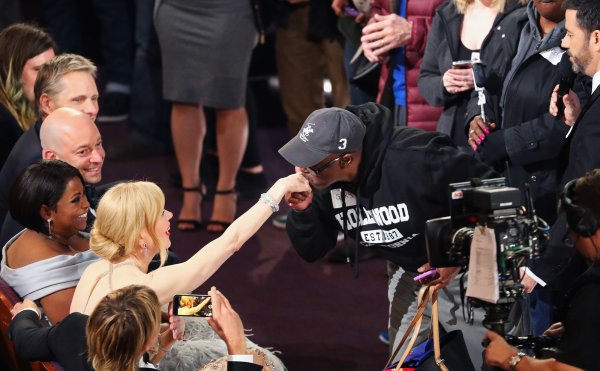 We Finally Know More About Gary From Chicago’s Identity
Next Up: Editor's Pick