Liberian Ebola Fighter, a TIME Person of the Year, Dies in Childbirth

Photograph by Jackie Nickerson for TIME
By Aryn Baker

The 2014 West African Ebola outbreak killed 11,310 people. Liberian nursing assistant Salome Karwah was not one of them. The disease that tore through her town in August of that year took her mother, her father, her brother, aunts, uncles, cousins and a niece. But by some miracle it left Karwah, her sister Josephine Manley and her fiancé James Harris still alive.

But just because Karwah escaped Ebola, it didn’t mean she was secure against the failures of Liberia’s broken medical system. She died on Feb. 21, 2017, from complications in childbirth and the lingering social stigma faced by many of Ebola’s survivors.

Karwah used to joke that survivors had “super powers” — because after overcoming the disease they were forever immune from it. Like any superhero, she often quipped, it was her moral duty to use those powers for the betterment of humankind. So as soon as she recovered, she returned to the hospital where she had been treated — the Médecins Sans Frontières (MSF) Ebola treatment unit just outside of the capital, Monrovia — to help other patients. Not only did she understand what they were going through, she was one of the rare people who could comfort the sick with hands-on touch. She could spoon-feed elderly sufferers, and rock feverish babies to sleep.

When I met Karwah, in November 2014, she, her fiancée, and her sister were already planning to re-open the family medical clinic that had been forced to close when her father, the local doctor, succumbed to Ebola. She envisioned a kind of super-clinic, whose survivor nurses would able to go where other medical personnel feared to tread because of their immunity. “I can do things that other people can’t,” she said then. “If an Ebola patient is in his house, and his immediate relative cannot go to him, I can go to him. I can take [care of] him.”

It was her determination to help Ebola patients when most of the world fled in fear that put her among the Ebola Fighters who were named TIME Magazine’s Person of the Year in 2014.

At the time, Karwah seemed invincible. When the outbreak in Liberia ended, and people could have a party without fear of catching the virus, she finally married her fiancé, changed her name to Salome Harris, and had her third child. She picked the name Destiny. Then she got pregnant again. On Feb. 17 she delivered a healthy boy, Solomon, by cesarian section. She was discharged from hospital three days later.

Within hours of coming home, Karwah lapsed into convulsions. Her husband and her sister rushed her back to the hospital, but no one would touch her. Her foaming mouth and violent seizures panicked the staff. “They said she was an Ebola survivor,” says her sister by telephone. “They didn’t want contact with her fluids. They all gave her distance. No one would give her an injection.”

Karwah died the next day. “My heart is broken,” says Manley. “Salome loves her children, her James. The one-year-old, the newborn, they will grow up never remembering their mother’s face.”

Manley doesn’t know what caused the convulsions, but believes that something went wrong in the surgery. Still, she says, if her sister had been treated immediately, she might have had a chance. Instead, “she was stigmatized.”

News of Karwah’s death rippled far beyond her small community in Liberia. Those who knew her for her tireless cheer in the MSF Ebola treatment clinic were devastated. “To survive Ebola and then die in the larger yet silent epidemic of health system failure… I have no words,” says Ella Watson-Stryker, a MSF health promoter who worked with Karwah in Liberia and was also among the Ebola Fighters on the 2014 cover. 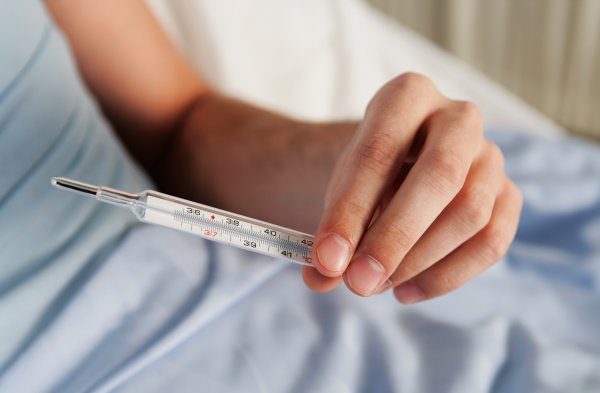 Why Men Are Much Worse At Being Sick Than Women
Next Up: Editor's Pick