In the wee hours of Monday morning, accounting firm PriceWaterhouseCooper — which counts votes and provides winners envelopes for the Oscars — apologized for the mix-up up that led to Warren Beatty mistakenly announcing La La Land as the 89th annual Academy Awards’ Best Picture winner.

The firm extended its “sincere” apologies to Beatty, Faye Dunaway, La La Land and Moonlight — which actually won the award. “The presenters had mistakenly been given the wrong category envelope and when discovered, was immediately corrected,” ran the statement, according to the BBC. ” We are currently investigating how this could and have happened, and deeply regret that this occurred.”

By then, the Best Picture blunder had already become the subject of online conspiracy theories, and a meme-worthy template for reimagining the winners of other contests — like the 2016 U.S. presidential election.

PwC’s apology was met with predictable derision on Twitter. “@PwC You had one job” wrote one user; another wrote: “Next time hire an audit firm to make sure everything works right.” 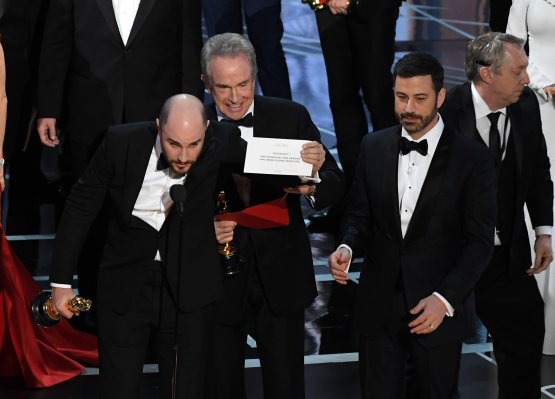 The Internet Had a Lot of Fun With the Envelope From the Best Picture Mix-Up
Next Up: Editor's Pick