“I also was holding my Best Actress in a Leading Role card that entire time, so whatever story… I don’t mean to start stuff, but whatever story that was, I had that card,” she told reporters backstage at the Dolby Theatre. “So, I’m not sure that happened.”

After the La La Land producers had already begun their acceptance speeches, show staff rushed the stage with the correct envelope, which contained the name of the actual best picture winner: Barry Jenkins’ Moonlight.

Following the Oscars ceremony, actor Neil Patrick Harris tweeted a screen shot from the telecast, which appears to show Beatty holding an envelope that reads “Best Actress in a Leading Role” before presenting.

Though the gaffe is arguably one of the most shocking Oscar moments of all time, Stone expressed her enthusiasm for the film that ultimately trumped La La Land.

“It was an amazing thing to hear La La Land. I think we all would have loved to win Best Picture. But we are SO excited for Moonlight,” she said in the Academy press room. “I think it’s one of the best films of all time… But again, God I love Moonlight. I’m so excited. So I think it’s an incredible outcome, but a very strange happening for Oscar history.” 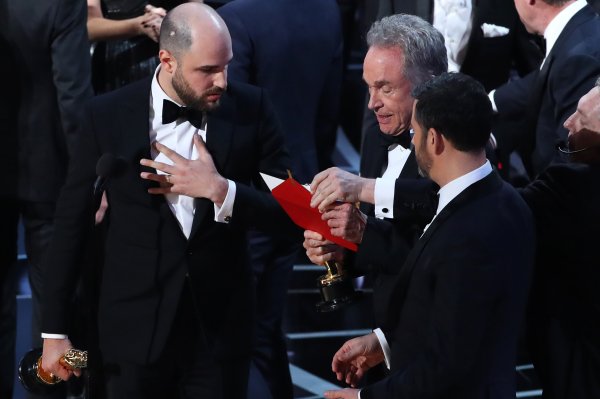 The Internet Lost It Over the Oscars Best Picture Mix-Up
Next Up: Editor's Pick