If you thought you lost your mind when it was revealed Moonlight actually won the Oscar for Best Picture and not La La Land, then you can only imagine what went down inside the Dolby Theatre.

There was utter shock and confusion throughout the crowd when the dust settled on what will no doubt go down as the most shocking moment in Oscars history and here’s how it all unfolded.

The La La Land cast was in mid-speech accepting the Best Picture award when someone backstage belted out, “Oh my God, it’s not La La Land, it’s Moonlight!”

As seconds went on, the confusion mounted, and the low-level buzz became full-on chaos backstage. Things like, “Oh my f—— God!” and “He’s got the wrong envelope!” could be heard. The feeling was described by one onlooker as “a mix of chaos and disbelief. Jaws are dropped.”

As the drama unfolded, Beatty walked off stage clutching the envelope. “Warren Beatty won’t give up the envelope! Security is coming,” one person says. Someone asks Beatty if he’s okay — he walks ahead and holds the envelope. Faye Dunaway appears totally upbeat and goes over what happened with a friend, and says something about seeing Emma Stone’s name on the card.

One production source was overheard saying, “It was NOT Warren’s fault!”

About five minutes later, Jimmy came off stage and says, “I don’t know what just happened! I should probably find out … for the rest of my life people are going to ask me about this.”

“Well, that was a history!” one woman in the crowd was overheard saying.

Over at the Lionsgate party for La La Land, gasps were let out as the stunning turning of events unfolded and many of the guests were in complete shock. 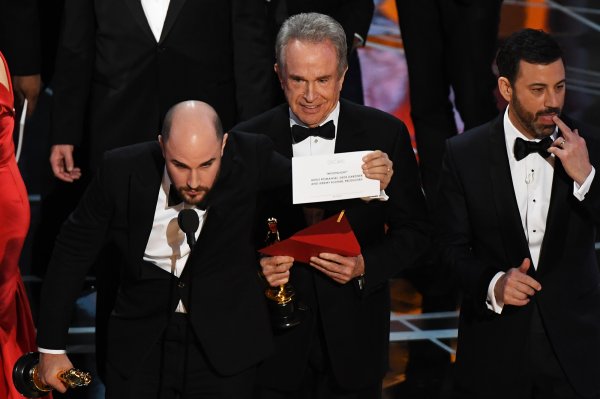 A Lively Oscars Show Ended With a Total Mix Up
Next Up: Editor's Pick