Kimmel didn’t wait long to bash Trump, saying, “I want to say thank you to President Trump. Remember last year when it seemed like the Oscars were racist? That’s gone, thanks to him.” Later, he said Trump would tweet about the Oscars “during his 5 a.m. bowel movement.”

He said many people had told him to address the political divides in the U.S., saying he would not be able to do that. “There’s only one Braveheart in the room,” he said, in reference to Mel Gibson. “And he’s not going to unite us either.”

Kimmel started the night with a barb at Justin Timberlake, who opened the Oscars with performance of “Can’t Stop the Feeling,” which is nominated for Best Original Song.

“On your behalf, I really hope the other guys from NSYNC were watching that performance because if they were, I think there’s a really good chance they’re going to let you back in the band,” Kimmel said.

And he couldn’t miss the chance to call out Damon, with whom he has had a long-running fake feud.

“I’ve known Matt for so long, when I first met Matt, I was the fat one,” he said. Kimmel continued: “Matt, as you probably know, could have starred in Manchester By the Sea. He handed what turned out to be an Oscar-caliber role over to his friend and made a Chinese ponytail movie instead.”

In closing his monologue, Kimmel teased the “highly overrated” Meryl Streep, who is nominated for her 20th Oscar. “Meryl Streep has phoned it in for more than 50 films over her lackluster career,” he joked. 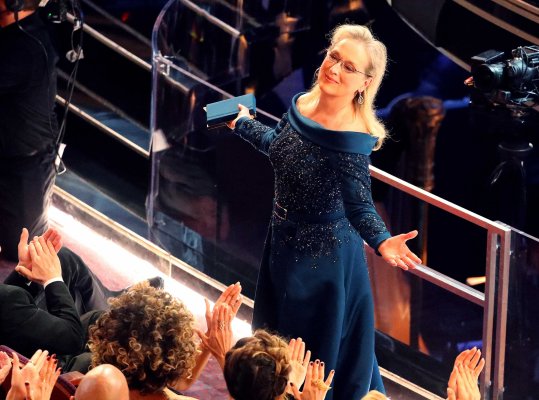 Jimmy Kimmel Roasted 'the Highly Overrated' Meryl Streep at the Oscars
Next Up: Editor's Pick