Review: 'The Legend of Zelda: Breath of The Wild' Is a Masterpiece

Scrambling across the idyllic vistas of Nintendo’s vast new fantasy sandbox The Legend of Zelda: Breath of the Wild, it’s easy to see the action-adventure’s sunken structures—plaintive artifacts of a vanished golden age waiting to be restored—as a metaphor for Nintendo itself.

In the game, you play once more as the franchise’s sandy-haired paragon, toiling to thwart nefarious forces, team up with the eponymous princess and revitalize a slumbering civilization. In reality, a company so iconic its name still works as a metonym for “video games,” is reeling from rejection of its last console, the bold but confusing and now beleaguered Wii U. The upcoming Switch console, meanwhile, represents Nintendo’s years-in-the-offing gambit to right the ship—and just maybe steam ahead toward terrain of the sort once held by the company’s disruptive Wii.

Breath of the Wild, a $59 action-adventure game that launches with the Nintendo Switch on March 3 (it’s also available for Wii U), has the makings of a masterful captain. Exploring its expansive collage of verdant, gelid and sun-scorched zones is akin to tromping onto the set of a painterly Studio Ghibli film. It’s like nothing else Nintendo has made, an experience so simultaneously prodigious and accomplished that it feels like a mind-blowing mic drop to the sort of “open world” games (Grand Theft Auto V, The Elder Scrolls: Skyrim, The Witcher 3) the industry seems bent on proliferating.

Director Hidemaro Fujibayashi gets there in part by abandoning familiar safety nets while scattering heuristic-upending hazards throughout the journey. If Link gets too cold hiking in alpine zones or hot exploring scalding ones, for instance, he dies. If he swims or climbs without resting, he risks drowning or plummeting to his doom. And if he wanders into an area with too-formidable monsters, since the entire world is basically accessible once players exit the starter area, he’s pretty much toast.

It’s an edgy, survivalist affair that doesn’t shy from brutalizing intrepid players (who will likely revel in the glories of being punished at last by the company). When Link’s health drops, players have to forage for scraps then find a campfire to cook. When the temperature plummets, you’d better have the equivalent of thermal underwear in your inventory. Even weapons are ephemeral, shattering after a few vigorous skirmishes. Just as Nintendo paints Switch as a millennials-and-up experience, Breath of the Wild assumes this isn’t your first rodeo.

This makes for one of the grandest, most gratifyingly pliable playgrounds the medium’s yet seen. Here players can wage tactically engrossing battles against multistory monsters (ingeniously with just a few buttons, because how you move matters more). Or snap pictures with a Switch-like in-game tablet to populate a compendium of the game’s flora and fauna, then follow audio pings to unearth whatever you’re tracking. Instead of smashing crockery or hacking greenery for hearts (as in past installments), players tinker with an absorbing Minecraft-like economy of foodstuffs and raw goods, balancing intuition against risk to conjure either wholesome or repulsive recipes and ability-bolstering potions.

It’s something of a revisionist’s fantasy come true, each gameplay transfiguration both clever and holistic. Rather than the staggered item rollout of earlier Zeldas, where you quested for themed artifacts that expanded your range of actions, you’re granted several from the outset, including three that let you fiddle with the fabric of reality itself. Bombs, another boon granted early, are now essentially geometry-inflected magic spells you cast while thinking about inertia or gravity. And that’s just the start. Terms like “magnesis,” “cryonis” and “stasis” not only sound thrillingly weird, they’ll go down as some of the smartest physics-bending ideas a Zelda game’s had.

In place of what amounted to a Bat-belt ability hunt in past games, Nintendo offers a topographically voluminous world brimming with ways in which to deploy those tools, be it within the game’s many shrines (mini-dungeons whose solutions yield items used to purchase health and stamina boosts), to excavate concealed loot, or simply to get from one precarious vantage to another.

Speaking of, almost anything visible is climbable—another series first—but the steady drip-drip of an ebbing stamina meter and threat of going splat turns lofty ascents into tense pathfinding puzzles. So too the rhythms of combat, which often require Dark Souls-ian economy of motion and the ability to adapt to mercurial, multi-lethal foes. The line between enemies and environment frequently dissolves in the coolest possible ways. A tree toppled by lobbing an explosive at a lumbering giant might, for example, wind up being used by said foe to bludgeon Link senseless. Be ready for anything, says an experience where even the moon harbors sanguine mysteries.

There are moments of quiet splendor as well—times where being present in a completely placid situation is its own reward. To stand by a road and observe Breath of the Wild‘s literal wilds can resonate for the same reasons a contemplative or languorous scene in a Hayao Miyazaki film might: Birds trill and insects chirrup. Merchants and other passerby wander to and fro, rucksacks bobbing and lanterns clanking. The wind skirls and bends thousands of discrete grass blades in ways that signal what you might do with items affected by atmospheric vectors and velocities. Storms queue next to sunny or dismal hours in an optionally visible weather prediction gauge, legs of lighting reaching down from roiling skyboxes to topple trees or kindle brush fires. The game’s naturalistic grandeur is off the charts, and composer Manaka Kataoka’s restrained, often poignant musical passages are a tour de force of complementary minimalism.

What would you do with a Zelda that dissolved its training wheels at the outset? Hunt deer or boar for provisions? Chase fireflies and lizards for elixir reagents? Squirrels up trees for nuts? Mix compounds in cook pots to conjure startling or mundane menu items? Scrounge for materials to dye your clothes in technicolor? Scale colossal rune-scrawled towers to glass zones for potential destinations? Scramble up a cliff to take the view of an approaching rainstorm? Paraglide over Elysian landscapes while sleuthing for secluded ledges or caves? Of these locales and activities, Breath of the Wild says little, inviting players to wander instead like Hansel and Gretel off the trodden path into seductive peril.

But there’s also a clear sense of Zelda-ish harmony in the gameplay that’s absent from other open world romps, a symmetry to its asymmetric but interlocking systems. Part of it’s what Nintendo holds over from past entries: the clever, puzzle-filled dungeons, the easy-to-grasp, hard-to-master particulars of combat, the gaggle of adorable characters and numinous Japanese Shinto-inspired mythology. That these things feel so organically cohesive here speaks to the maturation of Nintendo’s design chops.

Though in the end, most of what drives Breath of Wild to soar the highest this series ever has, comes down to essential Nintendo principles: recasting familiar notions of play in subtle, subversive and accordingly tectonic ways. That an odyssey this beguiling and capacious happens to also be playable on planes, trains and, yes, the toilet, is beside the point. 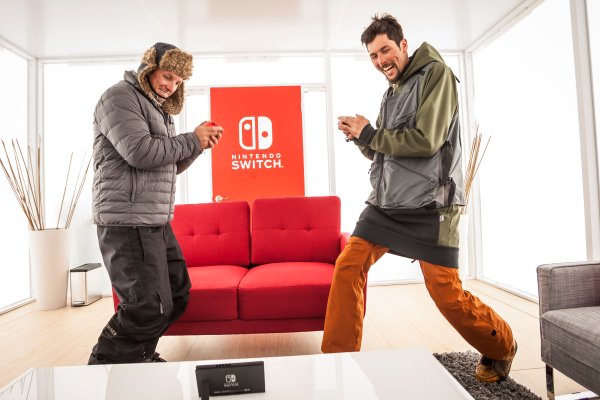 Review: '1-2-Switch' Is the Real Reason to Buy the Nintendo Switch
Next Up: Editor's Pick