Earlier this week, President Donald Trump’s administration announced they would roll back federal protections for transgender students, which allowed them to use the public bathroom that most closely aligned with their gender identity. Stephen Colbert gave the signs on those bathrooms a chance to speak their mind on The Late Show on Thursday.

In the show’s opening scene, The Late Show combined news footage of the announced action with an animated feature that delivered a blunt message for the president. Turns out the signs closely associated with the roll back are not too pleased about the president’s latest news.

Earlier in the episode, during his monologue, Colbert also played a clip of Matt Lauer asking Trump if Caitlyn Jenner could hypothetically use any bathroom in Trump Tower she chose, to which he said, “correct.” Colbert response: “which is good because right now I’m guessing a lot of trans people would like to take a dump in Trump’s lobby.” As for White House Press Secretary Sean Spicer’s explanation of the joint action, Colbert had a few words on that. “Is there a more cowardly phrase than this is a state’s rights issue.” 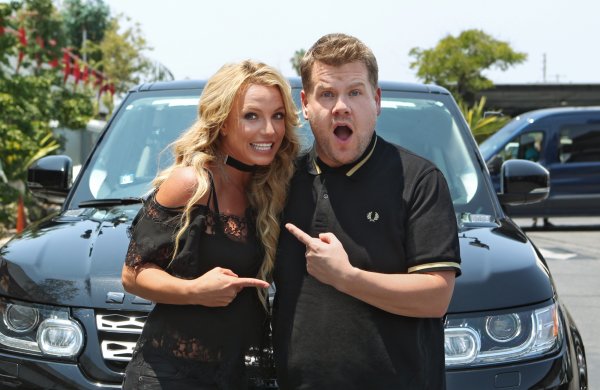 Watch James Corden Recap the Joys of 'Britney Ever After'
Next Up: Editor's Pick