Donald Trump Says He Wants the U.S. Nuclear Arsenal to Be 'Top of the Pack'

President Donald Trump wants the U.S. nuclear arsenal to stand “at the top of the pack,” and called an arms limitation pact with Russia a “one-sided deal.”

He made the comments in an interview with Reuters, during which he also talked about defense of U.S. allies in Northeast Asia and called the European Union “wonderful.”

“It would be wonderful, a dream would be that no country would have nukes, but if countries are going to have nukes, we’re going to be at the top of the pack,” he told Reuters.

Expressing concern that the U.S. “fallen behind on nuclear weapon capacity,” Trump said that the U.S. nuclear armory would not lag any others, “even if it’s a friendly country.”

Read More: Mikhail Gorbachev: ‘It All Looks as if the World Is Preparing for War’

Trump meanwhile criticized a U.S.-Russia agreement on nuclear armaments, the new START treaty, which would see both sides limit their strategic nuclear arms to an equal level for 10 years, according to Reuters.

Without specifying any specific course of action, he called it “a one-sided deal,” telling Reuters that it’s “just another bad deal that the country made.”

Russia currently has around 7,300 nuclear weapons, while the U.S. stockpile stands at 6,970, according to the Ploughshares Fund, an antinuclear group.

Trump also spoke about concerns he had with North Korea’s recent missile tests, one of which took place during his meeting with Japanese Prime Minister Shinzo Abe at the Mar-a-Lago club in Florida.

When asked about plans by South Korea and Japan, both U.S. allies, to deploy the U.S.’s THAAD missile defense system, he said that “there’s talk of a lot more than that.” He didn’t rule out a meeting with North Korean leader Kim Jong Un.

His positive comments about the E.U. come despite previous rhetoric on the matter and the encouragement his election has given to right-wing populists, who are opponents of the bloc. Trump told Reuters that he was now “totally in favor of” the union. 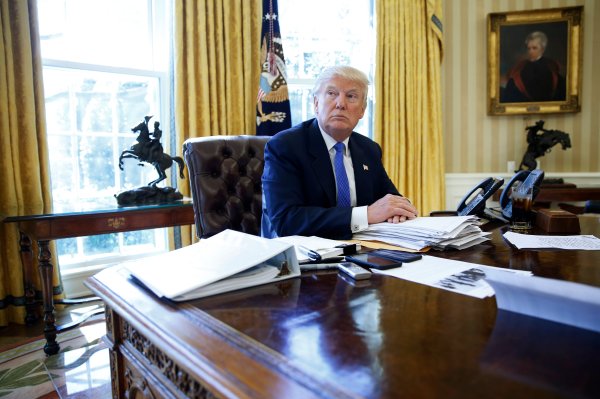 President Trump Forces a Reckoning Among Conservatives
Next Up: Editor's Pick