The box is slimmer than a dime (standing up, that is), and can either sit in an entertainment center or mount behind the television. A small Bluetooth remote has a handful of buttons for media playback and navigation, similar to an Apple TV remote, but it also has a microphone for voice search.

As with Amazon’s Kindle Fire tablets, the software is partly based on Android, but it also uses HTML to support easy porting of apps from other television platforms. Apps for Netflix, Hulu Plus, YouTube, WatchESPN, MLB.tv, NBA, Crackle, Bloomberg TV and others will be supported at launch, and of course Amazon will have its own services on board, such as Amazon Prime Instant video and a store for purchasing and renting videos.

Beyond video, Fire TV will stream music from users’ Amazon libraries and from streaming apps such as Pandora, iHeartRadio and TuneIn. Users can view photos as well, as long as they’re stored in Amazon’s Cloud Drive services.

Kindle Fire users can see information about what’s on the TV using Amazon’s “X-Ray” feature. Users will get a notification on their tablets, letting them tap to learn about actors and other information on a video, and see lyrics for music. Amazon’s FreeTime Unlimited service is supported as well, allowing parents to set time limits for their children and get recommendations on kid-friendly content.

As rumored, Fire TV will have a gaming component, and Amazon lists Disney, Gameloft, 2K, Ubisoft and Double Fine as some of the publishers that are on board. An optional Fire Game Controller will sell for $40, but users can also play games through the remote control or with a companion phone and tablet app. The games are mostly adaptations of mobile titles, such as Gameloft’s Asphalt 8, Minecraft Pocket Edition and Disney’s Monsters University; many are free to play, and the average price of a paid game is around $1.85.

Amazon did recently acquire a game studio, Double Helix, and Amazon is now building games specifically for the Fire TV and Kindle Fire tablets. One example Amazon demonstrated is Sev Zero, a third-person shooter that includes some tower defense elements. (Amazon’s website shows how a second player can use a Kindle Fire tablet to view the map, collect resources and launch air strikes.)

Fire TV’s components are similar to that of a smartphone or tablet, with a quad-core processor, a dedicated graphics processor, 2 GB of RAM and dual-band Wi-Fi. It supports 1080p video and offers Dolby Digital Plus Surround Sound via HDMI or optical output.

Amazon says it set out to fix a few common complaints with existing TV boxes: Performance can be laggy, search is too difficult on a typical remote control, and closed ecosystems don’t always offer the services users want. The Fire TV’s powerful specs and remote control microphone may solve the first two problems, but with the exception of Apple TV, many other set-top boxes are open to competing music and video services. Still, the gaming element is a unique feature, and the focus on a simple, speedy interface could help Amazon stand out.

Amazon’s Fire TV costs $99—same as an Apple TV, but twice the price of the cheapest Roku device—and is shipping today. 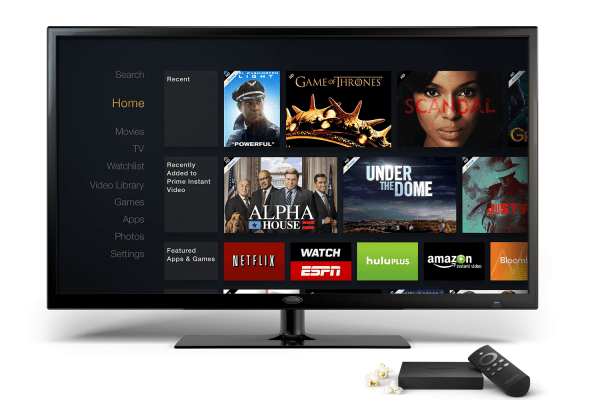 Hands On with Amazon's Fire TV: 10 Things I've Learned So Far
Next Up: Editor's Pick