A Deadly Shooting in A Kansas Bar May Have Been Racially Motivated, Witnesses Say

A gunman opened fire in a busy Kansas bar on Wednesday, killing one Indian man and injuring two others in what witnesses say may have been a racially motivated attack.

The Kansas Star reports that the suspect, identified by police as Adam Purinton, has been charged with first-degree murder and attempted murder after being apprehended Thursday morning in Missouri.

Srinivas Kuchibhotla, 32, died in hospital following the shooting in Austins Bar and Grill in Olathe. Alok Madasani, 32, and Ian Grillot, 24, were both injured but are reportedly in a stable condition.

Kuchibhotla and Madasani were both engineers who worked at the nearby GPS-maker Garmin and had studied in India, the Associated Press reports. In an interview with the Star, Grillot described how he jumped up to pursue the shooter after he thought the gunman was out of bullets.

“I wasn’t really thinking when I did that,” Grillot said. “It was just, it wasn’t right, and I didn’t want the gentleman to potentially go after somebody else.”

According to the Star, at least one witness recalled hearing the shooter yell, “Get out of my country!” before opening fire.

The Star reports that the suspect allegedly told a bartender in Missouri that he needed a place to hide because he had shot two Middle Eastern men. The suspect reportedly said he believed that he had killed them both. Kuchibhotla and Madasani are reportedly not from the Middle East.

Police said it was too early to determine whether the shooting was a hate crime, but said local authorities were investigating the incident with the FBI, AP reports. 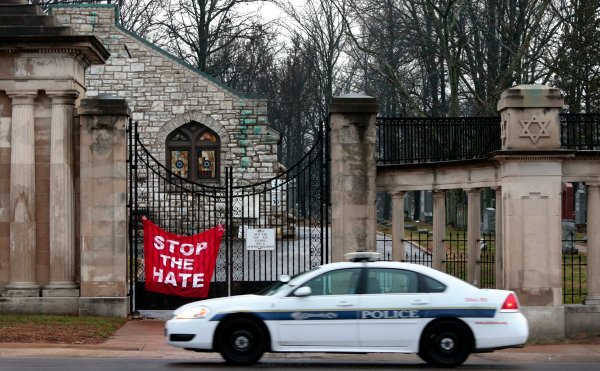 Why It’s So Hard to Investigate Recent Anti-Semitic Threats
Next Up: Editor's Pick