Though the Oscar-nominated documentary I Am Not Your Negro is a brand new movie, by filmmaker Raoul Peck, it is also a historical document: the narration, delivered in the film by Samuel L. Jackson, was written by James Baldwin, one of America’s foremost public intellectuals of the 20th century, who died in 1987. The main source material was a 30-page packet of letters obtained by Peck from Baldwin’s youngest sister, Gloria, that were notes for a book project called Remember This House, which Baldwin began to propose in the late 1970s but never got to write.

Remember This House was to be Baldwin’s magnum opus, a critique of American society from the viewpoint of the assassination of his friends Medgar Evers, Malcolm X and Martin Luther King Jr. As Peck aptly notes in the introduction to the film’s companion book, what these activists had in common had less to do with race and each man’s approach to the Black Liberation Movement, but rather that all three were “deemed dangerous” and “disposable.”

So, though the film provides a provocative analysis of American race relations up to the present day, as a testament to Baldwin’s continued relevance, an understanding of the moment when Baldwin began the project can add another layer to the movie’s meaning.

Baldwin’s straight-no-chaser style of criticism, as captured in his essay collection The Fire Next Time, had made him a household name more than a decade earlier. As a 1963 TIME cover story about the author and activist noted, “in the U.S. today there is not another writer — white or black — who expresses with such poignancy and abrasiveness the dark realities of the racial ferment in North and South.”

At the heart of Baldwin’s argument was the question of who is responsible for the problem of racism, a point the film makes with Baldwin’s use of language. Never one to mince words, he wrote and spoke what Toni Morrison called in a 1987 remembrance of her friend the “undecorated truth” about the American illusion, which juxtaposed whiteness as American innocence with blackness as sullying American purity hence, “the Negro Problem.”

Such an illusion was based on what Jabari Asim in his book The N Word dubbed one of America’s “founding fictions,” the invention of a specific term to define blacks as subhuman and to lend credence to notions of white supremacy. As Asim notes, “From the outset, the British and their colonial counterparts relied on language to maximize the idea of difference between themselves and their African captives.” Yet it was far more than just a word. Asim demonstrated how over the centuries the N word became the ideological justification that codified American society and its institutions.

One of the most striking moments in I Am Not Your Negro comes from a 1963 PBS interview between Baldwin and the esteemed psychologist Kenneth Clark, whose research — produced with his research partner and wife Mamie Phipps Clark — had influenced the Supreme Court decision in Brown v. The Board of Education. Baldwin, rejecting America’s founding fiction quipped, “I am not a ‘nigger,’ I am a man!” He asserted that “the future of the country” depended on white peoples’ ability to ask themselves “why it was necessary to have a ‘nigger’ in the first place” and why they would have invented that idea.

Despite his harsh criticism, Baldwin remained hopefully optimistic that American equality was achievable. The passage of the Civil Rights Act of 1964 and the Voting Rights Act of 1965 had brought a renewed sense of hope.

But, though Baldwin’s message would essentially remain the same for the rest of his life, the world changed around him. The assassination of King in 1968 was the death knell of that period’s Civil Rights Movement, and, in the decade that followed, the assassination did not spur any great movement among white Americans to reconsider. Instead, as Carol Anderson has demonstrated in her book White Rage, a political backlash against civil rights had ensued, and politicians like Richard Nixon and Ronald Reagan would capitalize on opposition to civil rights victories in order to win elections. Meanwhile, Baldwin was being tracked by the FBI; as his FBI file, which spanned the years 1958-1974, attests, he was under continued surveillance.

The film captures Baldwin’s sentiments during this time with Jackson narrating, “What can I do? Well I’m tired.”

When Baldwin began work on Remember This House, he had resolved, as he stated in a 1979 speech at Berkeley, to communicate that, despite the legislative achievements of the Civil Rights Movement, blacks remained ruled by slave codes and that his fallen companions were carrying out a “modern day insurrection.” In other words, though the three assassinated men at the center of I Am Not Your Negro had given their lives to their own visions of black liberation, the film comes not from a place of simple celebration of the legacy of Evers, X and King, but from a moment when Baldwin saw, as much as ever, the need to point out to white audiences that the work those men had done had not achieved its aim, and that it was their job — white Americans — to make things better.

As he once put it, “You always told me ‘It takes time.’ It’s taken my father’s time, my mother’s time, my uncle’s time, my brothers’ and my sisters’ time. How much time do you want for your progress?”

Despite his disillusionment and his view that it was not the responsibility of blacks to fix things, Baldwin continued to use his writing and his voice throughout the 1970s and much of the 1980s as a vehicle for social change — though the world to which he spoke was a new one. On Dec. 10, 1986, almost a year before his death, Baldwin, during a Q&A session after a National Press Club lecture, insisted that the country institute “a white history week; and I’m not joking,” focused on dispelling the illusions that kept the nation in a constant state of peril.

“History is not the past,” stated Baldwin, “It is the present. We carry our history with us. We are our history.” 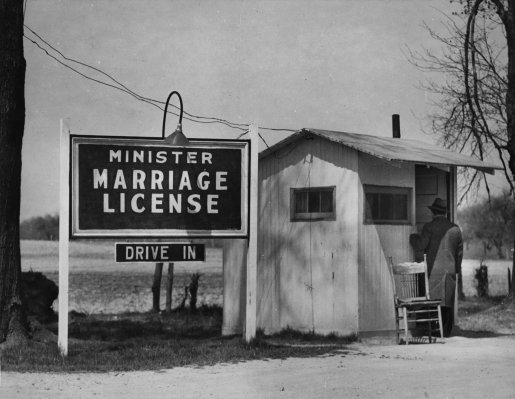 How Elkton Became the Marriage Capital of the East Coast
Next Up: Editor's Pick