Why Older Mothers Should Be Open About Fertility Issues

At age 35, I was one month postpartum after giving birth to my twin son and daughter and was on my first solo outing to the grocery store with them. As I stood in the produce aisle examining the season’s first Honeycrisp apples, a woman turned to me and asked if my twins were identical.

“No,” I answered politely.

“Are they natural?” she rebounded.

What she was really asking, however, is if my twins were conceived spontaneously or a result of fertility treatment. For many women, this is a deeply personal question and one potentially filled with shame.

For me, as a reproductive endocrinologist and infertility specialist, I know the success of IVF is linearly and inversely related to a woman’s age and is less than 1 percent after age 44. The likelihood of a healthy live birth without fertility treatments at age 50 is less than one in a million.

There are limits, however, to what technology can accomplish. IVF cannot completely overcome age related infertility. To date, the oldest woman to be successful with IVF using her own current eggs is 46 years old. Women who conceive with IVF beyond age 46 are either using their own eggs that were frozen at a younger age or, more likely, donor eggs.

The American Society for Reproductive Medicine Committee Opinion states that a woman in optimal physical and mental health can safely become pregnant and deliver a baby up to the age of 55. In other words, a 55-year-old woman can have the same chance of getting pregnant as a 25-year-old woman by using an egg donor.

Yet, without transparency, some high-profile women continue to perpetuate the myth that women are fertile into their late 40s and beyond. While I do not know how many of these women conceived — they don’t say in interviews, and so far no celebrity journalist has been as direct as the stranger in the grocery store was to me — it is highly likely that science was at play.

More education and public awareness is needed regarding age-related decline in fertility and the limitations of IVF technology. Many women delay childbearing with the false assumption that IVF will be able to help should they have trouble conceiving.

Then they are shocked to learn that the likelihood of achieving pregnancy after the age of 40 is only 10 percent. The majority of my patients are plagued by shame and a sense of failure that they used technology to help them conceive.

Many infertility patients keep their treatments a secret from their parents and their families. Competitive motherhood is a sport that seems to be gaining in popularity and begins with conception.

Admittedly, I feel conflicted about the message that some women are sending about their ability to conceive. On one hand, infertility is a private matter and how one chooses to conceive is not on the same as what designer one chooses to wear to the Oscars.

On the other hand, women look up to many celebrities as role models. Non-disclosure of fertility treatments perpetuates a false sense of security. Armed with proper knowledge, women may choose to plan to have children at a younger age or may choose to pursue egg freezing as a measure to preserve fertility. They may also choose to delay motherhood knowing that alternative options such as donor oocytes exist.

My life is an intersection of the professional and personal, the public and the private. I did not explain this to the woman in the grocery store, but my twins were the result of in-vitro fertilization and as embryos they underwent advanced pre-implantation genetic screening due to my history of repeated miscarriages.

Becoming a patient seven years ago in my own field changed me as a physician, mother and person. I have a profound appreciation for how this science changes lives.

So much good can come from educating women on their fertility potential. Women would be empowered to make better reproductive choices.

Eve C. Feinberg, MD, is an Assistant Professor of Obstetrics and Gynecology at Northwestern University Feinberg School of Medicine and founder of the Kevin J. Lederer Life Foundation. She is an NU Public Voices Fellow through The OpEd Project. 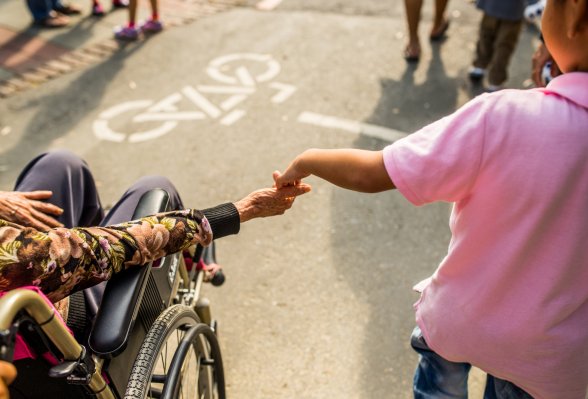 Be Nice Because It’s National Random Acts of Kindness Day
Next Up: Editor's Pick