How Logan’s Young Heroine Could Save the X-Men Franchise

Spoilers for Logan ahead.

The newest X-Men movie features a pint-sized pugilist. Her name is X-23—people call her Laura—and she’s Wolverine’s mini-me, claws and all. She slaughters men many times her size, with help from the two claws that protrude from her hands (one less than Logan’s three) and one that protrudes from each of her feet.

Logan, out March 3, might be Hugh Jackman’s final outing as Wolverine, but X-23 could be the future of the X-Men franchise. Here’s what you need to know.

Wolverine’s DNA was used to create her

In Logan, X-23 is basically a clone of Logan. Remember Colonel Stryker, the evil guy in the Weapon X lab who put adamantium on Wolverine’s skeleton in X-Men Origins: Wolverine, turning him into a super solider? Probably not since that movie wasn’t very good. Well, anyway, Stryker’s son has carried on his legacy in 2029 by building an army of super-powered children using the DNA left over from mutants, including that of Logan (a.k.a. Wolverine).

Last year’s X-Men: Apocalypse hinted at this coming development. In that movie, a young Jean Grey (Sophie Turner) releases Wolverine from the Weapon X facility. (How he got there in the first place is a mystery since in 2014’s Days of Future Past the X-Men travel through time and rewrite history. In the new universe, Wolverine is kidnapped by a person who looks to be Stryker but is revealed to actually be Mystique in disguise, suggesting she’s going to save him from Weapon X. So how he wound up at Weapon X with adamantium claws despite Mystique’s efforts is unclear.) In an Apocalypse end-credits scene, a mysterious man carrying an Essex Corp briefcase collects some of Wolverine’s blood from Weapon X.

MORE How Logan Fits Into the X-Men Timeline

It’s Essex, then, that creates the mutant children in an illegal facility in Mexico. However, the project is shut down after Essex learns they cannot control the kids, who are annoyingly growing consciences. Some nurses help the children escape, and Laura finds her way to Logan.

In the comic books, Weapon X tries to replicate what was done to Wolverine but failed. A scientist named Sarah Kinney eventually begins using Wolverine’s DNA to try to create a clone. She fails 22 times but eventually uses the last of the DNA to create a female version: x-23. (She also has to carry the baby because her boss is really mean.) In most of the comics, X-23 fights as a teenager or young adult. The character is aged down in the movie.

She has other similarities besides the claws

Like Logan, Laura has a predilection for rage. She also seems to have a quick-healing ability like her “dad,” recovering as soon as she’s shot or stabbed.

She could be crucial in future X-Men films

Okay, let’s talk about the end of Logan. Wolverine is almost certainly dead. Turns out he was already aging, thanks to the adamantium in his body that was poisoning him all along. It would have done him in eventually, so fighting a souped-up, new version of Wolverine only accelerated the process. In Logan, we see Wolverine’s last breath and a funeral.

So if there are going to be more Wolverine films, they will almost certainly focus on Laura. At the end, we see her wandering off with her fellow young mutants to a sanctuary. Could the franchise be setting up an all-new X-Men crew led by Laura as the new Wolverine?

MORE See How Marvel’s Wolverine Has Evolved Over The Years

That is very similar to what happens in the comics. In a 2014 series, Logan dies and Laura becomes the one and only Wolverine in the books. She wears her own version of the classic yellow costume and even gets a pet Wolverine named Jonathan, which would be pretty great to see onscreen.

That said, we may not have seen the last of Hugh Jackman in the X-Men movies. Jackman has said that he’s closing the chapter on this character after 17 years, but that doesn’t necessarily preclude cameos in the X-Men prequels. Logan takes place in 2029. The current X-Men films take place in the 1970s, so he could easily show up in those movies—especially since he doesn’t really age. There’s also the whole alternate universe issue that Days of Future Past introduced, which means that Wolverine could still be alive and well in an alternate timeline. 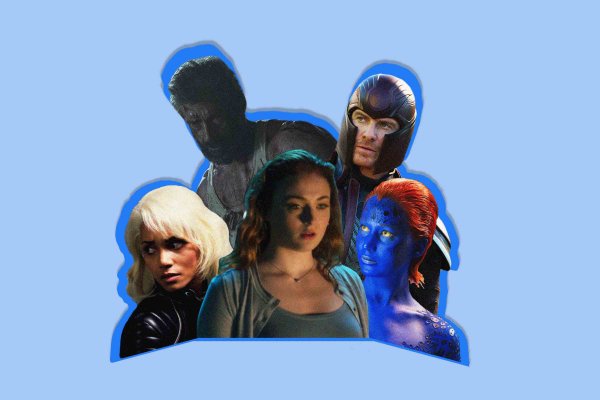 How X-Men: Dark Phoenix Fits Into the X-Men Timeline(s)
Next Up: Editor's Pick