Boshora Adam, an African refugee, appears with his twin daughters in their home in Tel Aviv, Israel. “The hardest part about raising my children in Israel is that it’s becoming more segregated," he says. "On the playground you notice that parents keep their children away from African children, and this worries me for my children’s future.”
Malin Fezehai
Ideas

Everyone knows about Donald Trump‘s big wall. People watch the news and talk about the wall. People drink their coffee on the way to work and talk about the wall. There’s not one brick in Trump’s big wall yet — but you can see it from afar already. And at the same time a different wall, an invisible wall, grows higher and higher around us. It is the invisible wall that separates us from the invisible people, the ones that clear the coffee cups we sipped from while talking about Trump’s wall.

All around the world — in America, Germany, the U.K. and Israel — we talk about “the immigration crisis” or “the refugee problem” as if we were discussing manufacturing problems in the new generation of a cell phone rather than people. Statistics worry us — the charts show an increase in the number of refugees, the percentage of children immigrating alone is rising. But the faces behind the statistics remain vague. I wonder how many times I’ve sat in a restaurant, having an intimate conversation, while a refugee cleaned the table, completely unnoticed. I don’t lower my voice when she leans across my table. She’s not important enough for me to even care if she hears my fight with my partner or the gossip about my new boss. I could not differentiate her face from other faces.

How can someone be at the heart of public discussion, yet remain invisible? That’s the difference between a problem and a person. A problem is something you can talk about. A person is someone you have to look at. The refugee’s tragedy is a heartbreaking picture in the news, but the wall between the news and our everyday life is high and stable.

While we might have a clear opinion on Trump’s wall, we neglect the invisible wall that shapes our own moral choices as individuals. As people living in states, answering to governments, our feelings of personal responsibility are lessened. If an African boy in Israel, a Syrian girl in Europe or a Mexican mother in the U.S. were dying on our doorstep, each one of us would hand him or her a glass of water. But when they are walking in the desert many miles away, we don’t feel any personal moral responsibility if they die of thirst.

This phenomenon is very vivid in my country, Israel, the present destination of Eritrean refugees. Escaping a brutal dictatorship, they try to cross the desert toward the Promised Land. Their journey to Israel through the Sinai resembles the exodus of the biblical Jews. One would expect that those who wandered across the world in search of a homeland would remember this when they find themselves as the gatekeepers. But the memory of a nation is shorter than the memory of a goldfish. Israel, a nation of refugees, closes its gates in the faces of the present refugees. The United States, a nation of immigrants with the hope of a better future, refuses to give this hope to new immigrants.

But whose responsibility is it? If the government in Syria violates the basic rights of its people — are other governments responsible for taking in those people as refugees? My answer is yes, but only to a certain extent. While divine grace is infinite, human grace is like yogurt — it has an expiration date. People aren’t angels, and if we want to change the way the immigration crisis is dealt with, we should take that into account. When a person asks, “Am I my brother’s keeper?” the answer is “Yes” — but this doesn’t mean he should share all he has with his brother. So — how much are we willing hurt our own economy or lifestyle in order to help? It’s obvious for instance that Israel shouldn’t allow the whole population of Eritrea to immigrate to its territory, but right now only 1% of the refugee requests are answered — far from enough.

And here I am, using abstract numbers. Once the debate is about 100% or 1%, people disappear, and the matter becomes technical. Sometimes there is no choice but to have a sterile discussion on immigration facts and figures, and yet when you remember the people behind the numbers it is more likely that the discussion’s conclusions will be more human. The higher the internal walls are, the harder it is to see the faces behind them.

So how does one knock down a wall?

First, he admits the wall already exists there. Prior to trying to prevent the construction of Trump’s wall, we need to understand that the wall was built a long time ago, in our minds. Had those walls not existed, Trump’s wall would not be accepted at all as a possible idea. Trump holds a mirror, and we need to look at ourselves in it.

Invisible walls do not collapse by themselves. They require awareness, open eyes. Whenever I see data — only 1% of asylum seekers are accepted — I force myself to translate this number into faces. It’s hard, because media coverage is biased towards presenting more numbers and less faces. I assume that when signaling recent presidential orders, such as prohibiting the entry of Muslims to the U.S., President Trump has seen numbers and headlines, not human beings. But one minute of guided imagery never hurt anyone. Can you remember to imagine the people behind the wall — and the orders, the headlines, the coffee trays?

When I studied psychology, we devoted numerous hours to the way empathy develops. Children around the age of five develop the complex cognitive ability to imagine the world through the eyes of others. If this is what happens at the age of five, what happens at the age of fifty? But just as you can train human consciousness to construct barriers, it also can be trained to remove them. When we come to knock down invisible walls, what begins with self-awareness can grow into actions, into protests that in turn inspire others. Perhaps the world needed Trump to remind us all of what really matters. 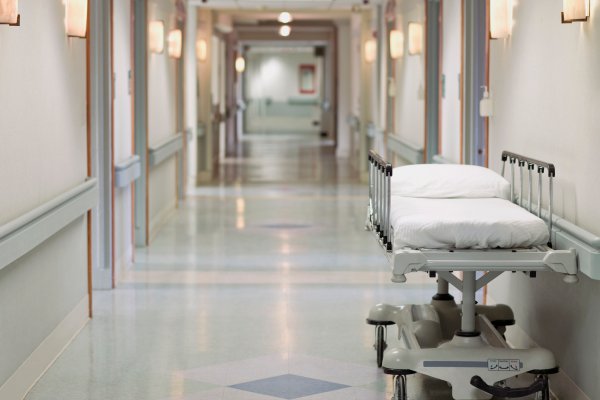 Immigration Agents Took a Woman With a Brain Tumor Out of the Hospital
Next Up: Editor's Pick