By the time he left office, Barack Obama had taken several steps to support transgender people, moves that “thrilled” advocates and outraged social conservatives still stinging from a same-sex-marriage loss before the Supreme Court. But the tide is now heading in a new direction, and the Trump Administration on Wednesday took what LGBT-rights groups view as a big step back, one they are describing as “bullying” transgender kids.

In a joint action, the Departments of Justice and Education rescinded instructions that schools nationwide must respect the gender identities of transgender students, allowing them access to bathrooms and other facilities or single-sex programs that align with their sense of self. “The prior guidance documents did not contain sufficient legal analysis or explain how the interpretation was consistent with the language of Title IX,” Attorney General Jeff Sessions said in a statement Wednesday. “The Department of Education and the Department of Justice therefore have withdrawn the guidance.”

Under Obama, those same departments issued the guidance in several pieces as an interpretation of Title IX, which prohibits sex discrimination in education. The instructions answered a question that school administrators had been asking as more transgender students were making themselves known: How should that word sex be understood when it comes to their treatment, to make sure schools were not running afoul of the civil rights law?

“Under Title IX,” a school that receives federal funds must generally “treat transgender students consistent with their gender identity,” as one memo from the Department of Education put it. Such instructions are consistent with a body of case law that has been building for the past several years, but they have also been controversial — leading about a dozen states to sue the federal government for allegedly overstepping its bounds and “rewriting” the law.

Speaking with reporters on Wednesday, White House press secretary Sean Spicer echoed the argument that such an interpretation of Title IX is flawed. “It’s incumbent upon us to actually follow the law and to recognize that Title IX never talked about this,” he said. “It was enacted in 1972. There was no discussion of this back then, and to assume certain elements of the law were thought of back then with respect to this would be completely preposterous.”

Opponents of the guidelines have also argued that allowing transgender-students bathroom access jeopardizes the privacy of other students, and some have even questioned the authenticity of transgender students’ gender identities. The Obama-era interpretation of Title IX “does violence to the notion of physical privacy,” the states’ lawyers wrote in a complaint, “by advancing an understanding that requires the mixing of the sexes in intimate areas.”

Transgender students and their parents have in turn called the privacy argument a red herring and said that bathroom access — as well as generally being treated in a way that is consistent with their gender identity — is necessary for transgender students to participate equally in getting their education.

“All they want is to just fit in,” said Katharine Prescott, the mother of a transgender boy who committed suicide in 2015, after struggles that included being called “she” and isolated from peers at school. When transgender kids are told to use a bathroom that does not match their gender identity or a nurse’s restroom, she told TIME on Wednesday, they feel stigmatized and often avoid using the restroom at all.

“It’s saying you are this monster,” she said, “that you don’t belong.”

Trump’s Department of Justice previously backed away from a challenge the Obama Administration had made in the case filed by the states, signaling that newly installed Attorney General Sessions was going to be less supportive of transgender rights than his predecessors. As a member of Congress, Sessions previously expressed doubt about expansions of LGBT rights, including opposition to same-sex marriage and saying the now-defunct “don’t ask, don’t tell” policy that banned the service of military members who are openly gay had been “pretty effective.”

On Wednesday, Spicer also confirmed reports that there had been disagreements about how to approach the guidance. The instructions were jointly issued by the two departments and so need to be rolled back in concert, but Education Secretary Betsy DeVos reportedly resisted the move — despite insistence from Sessions — and said that there should be language that instructs schools to generally protect transgender students. (In a release announcing the change, the Justice Department said it was committed to protecting “all students, including LGBTQ students, from discrimination, bullying, and harassment.”)

“There is no daylight between the President or any of the Secretaries,” Spicer said, acknowledging that there was some back-and-forth over timing and specific language, but also saying that there was agreement on the conclusions.

Such a step by the Trump Administration could render the states’ lawsuit moot and affect a historic case that will be argued at the Supreme Court next month. Gavin Grimm, a transgender boy from Virginia, sued his school board after being banned from the boys’ room at school and won a ruling from the Fourth Circuit Court of Appeals that relied on the guidance issued by Obama’s Department of Education. Along with many others, Grimm was headed to the White House on Wednesday evening to protest, even as advocates on both sides eagerly awaited to see the precise language that would be issued.

When asked during a press briefing on Tuesday to address the rumors that the instructions would be rolled back, Spicer said that President Trump believes the treatment of transgender students in public schools to be “a states’ rights issue.” Advocates called that notion “outrageous,” saying that Title IX should continue to protect transgender students — even if they are no longer aided by the feds in pursuing enforcement actions.

“It is of course outrageous that the federal government would decline to carry out its obligation to enforce the civil rights laws, to protect the most vulnerable students from discrimination,” said the Transgender Law Center’s Ilona Turner. “It’s hard to think of something more hostile or cruel, frankly, that they could do to the transgender community.” 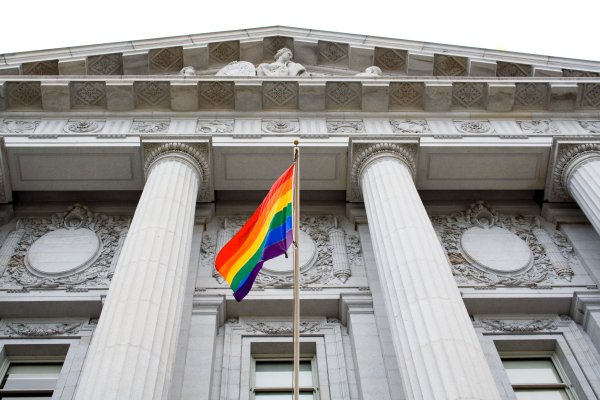