Over 100 Women Get ‘Nevertheless, She Persisted’ Tattooed on Their Bodies

More than 100 women lined up recently to get tattoos honoring Senator Elizabeth Warren.

The Star-Tribune reported that a group of women organized an event to pack a Minneapolis tattoo shop with customers looking to get some variation of “Nevertheless, she persisted” inked on their bodies. The quote, of course, comes from Senate Majority Leader Mitch McConnell, who silenced Warren for attempting to read a letter written by Coretta Scott King in opposition to Attorney General Jeff Sessions during his confirmation hearings. “She was warned. She was given an explanation. Nevertheless, she persisted,” McConnell said about Warren.

McConnell’s quote has since become a rallying cry for some women, including Nora McInerny who started the event. McInerney created a Facebook event initially intended for a few friends to get the tattoos. But, according to the Star-Tribune, she accidentally made the event public — and 2,000 women subsequently expressed interest in attending.

So on Tuesday, over 100 people descended on Minneapolis’ Brass Knuckle Tattoo Studio to get their ink. Some women waited up to six hours to get their new body art. The majority of the proceeds from the tattoos will go to Women Winning, a nonprofit focused on electing pro-abortion rights candidates to office.

“Did I ever think I would get a Mitch McConnell quote tattooed on my body? No, I did not,” McInerny told the Star-Tribune. “But those are three words that any woman would be able to see themselves in, regardless of politics.” 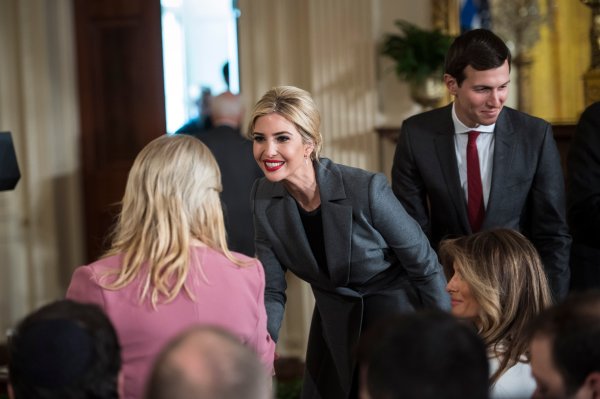 Ivanka Trump’s Jewelry Brand Allegedly Owes $5,000 in Back Taxes
Next Up: Editor's Pick