How I Finally Got My Picture With Pelé

Pelé, the soccer wizard, may have been the first famous person to enter my consciousness. I was just three years old in 1970, when his goals brought Brazil its third World Cup. My father, a soccer nut, had never seen Pelé play, but read enough about him to become a fan, and he passed that enthusiasm down to me. When I was old enough to kick a ball around, I scrawled ‘10’ — the number Pelé made famous — on the back of my T-shirt and tried to execute his patented bicycle kicks.

I never became the goal-scoring superstar of my own imagination, but when I started my career as a journalist it allowed me to invent a new fantasy: Someday, I told myself, I would meet my boyhood hero. Someday, I would shake hands with Pelé.

The opportunity came in 2002 when TIME sent me to Japan to cover the World Cup, my first major sports assignment. I knew Pelé was going to be there, in his capacity as a pitchman for a famous credit-card brand, and I made it my business to find him.

In the meantime, I got to meet, interview and generally hang out with my favorite players. And not just current (for the time) stars like Brazil’s Ronaldo and Argentina’s Gabriel Batistuta, but also stars of a previous era, like French genius Michele Platini and the German ‘Kaizer’ Franz Beckenbauer.

But as a newbie sports journalist, I was not entirely sure about the rules governing such encounters. Was I allowed to ask the players for their autographs or to have my picture taken with them? I decided, foolishly, that to ask would be to behave like a fan, and therefore unprofessional.

It was agonizing to deny myself the opportunity, and made worse by the fact that nobody else seemed to be following this rule. I would find myself chatting with Nigeria’s Jay-Jay Ococha, and a Nigerian journalist would come up and ask if I could shoot a picture of the two of them. I always complied, of course. But I never summoned the courage to ask for myself.

Things came to a head one night in Tokyo, at a grand party thrown by the makers of the official World Cup ball. Sure enough, Pelé was there, and to my delight he agreed to an interview on the spot. He was, true to everything I had read and heard about him, genial and charming. Just over his shoulder, a couple of feet away, Platini was deep in conversation with Beckenbauer. I felt honored just to be breathing the same air as the soccer aristocracy.

Then, a young Japanese kid came up: he could have been no more than 10 years old and he carried a camera half his size. He approached to Pelé and asked if he could take a picture. Once Pelé agreed, the kid went over to Platini and Beckenbauer and asked if they would stand alongside Pelé.

As the giants of the game lined up, I stepped out of the frame, to give the kid a nice shot of the troika. Then, just because he’s such a nice guy, Pelé reached out and grabbed my arm, and dragged me into the picture. “No, you must join us,” he said.

The kid shot a couple of frames, bowed and left.

I couldn’t believe my good luck: a picture of me with these three amazing players! But then a quandary arose in my mind. Should I run after the kid and get his contact details, so I could ask for the picture later? (Remember, this was 2002, before cellphone cameras.) Or should I take the opportunity to have a conversation with Pelé, Platini and Beckenbauer?

Naturally, I chose to stay and chat with my idols.

About half an hour later, I went looking for the kid. He was gone, and nobody could tell me who he was.

For over a decade, I have told friends the story of that picture: the one I would give almost anything for, but could never have. I imagined what the kid’s thoughts would be when he looked at it: “Pelé, Platini, Beckenbauer… but who the hell is THAT guy?”

I’ve kicked myself for my stupidity. And I’ve learned not to be so stupid: years later, when I interviewed Leo Messi, Sachin Tendulkar and Neymar, I made sure I got pictures taken with them.

But that picture, THAT picture… it would never be mine.

Life sometimes throws up consolations. Yesterday, Pelé came to the New York offices of TIME for a photoshoot. I badgered my colleague, Belinda Luscombe, to let me sit in on the shoot. When the chance arose, I told Pelé the story about that night in Tokyo, 12 years ago. He didn’t remember the incident — Why would he? — but since he remains a genial, charming man, he kindly indulged my request for a picture. And he signed a miniature soccer ball I happened to have in my office.

All that remains now is to cling to the hope that life (or Luscombe) will somehow engineer encounters with Platini and Beckenbauer. When that happens, I know I will not hesitate. 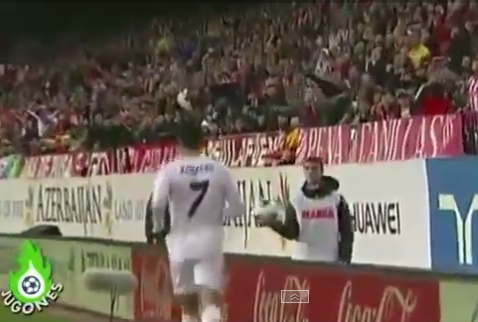